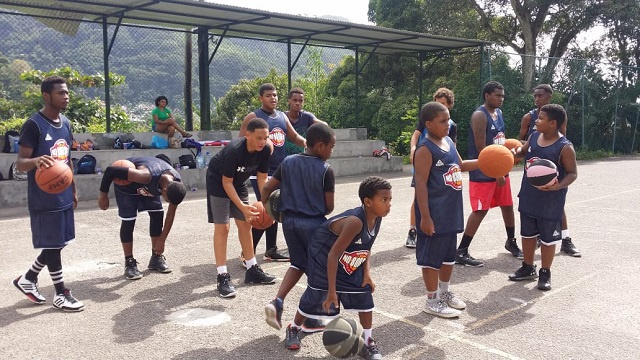 Payet said that with the revamped academy, they will be looking at grooming players at a younger age. (Bel Air Basketball Academy)

(Seychelles News Agency) - The Bel Air Basketball Academy in Seychelles will train younger players to give them a better chance at reaching professional levels as part of the institution's revamping plan after five years in existence.

Launched in 2016, the academy, which is headed by Jeffrey Payet, became the first privately owned basketball institution in Seychelles.

"With the revamped academy, we will be looking at grooming players at a younger age, so they can learn the fundamentals of the sport and develop into elite players that will benefit Seychelles in the future," said Payet.

He added that the aim of having players from the academy eventually developing into professional basketball players remains the ultimate goal, and that he has already formed links with the prestigious EuroProBasket Academy based in Spain.

EuroProBasket is the world leader in basketball opportunities and provides advanced training with professional European coaches along with the most advanced basketball facilities in Europe.

"We recently sent two of our members to the academy, namely young player Luchiano Roseline and coach Gregoire Scholastique, where they were able to train and gain some experience of elite level academies, which they will be able to share with the locals," Payet told SNA.

He said the last five years have been a real rollercoaster for the academy "where we managed to take some important steps, but at the same time some things did not work out the way we wanted."

The Academy signed an agreement with South Africa-based African Basketball Academy to get assistance in the development of basketball among the youth of Seychelles and to form a strong link between the two academies.

Under the agreement, two coaches were brought in to work with the young players but both left the academy.

Seychelles, an archipelago in the western Indian Ocean, currently has a professional basketball player, Abdel Sylla, playing in the French second tier for Hermine Nantes club.

With the COVID-19 pandemic, Payet said things have not been easy, as the 30 members of the academy have not been able to train regularly.

He says while this is a setback and also the fact that the Seychelles Basketball Federation has also been going through a number of issues has not helped.

"I do hope that once the new federation gets to work and sports are able to resume, things will get better. Basketball is one of the most popular sports in the country and if we want to produce quality talent, there must be a strong commitment from all involved to work together," he said.

There have been no basketball competitions organised by the Federation since 2019 after it was suspended for fraudulent financial reports and mismanagement of funds.