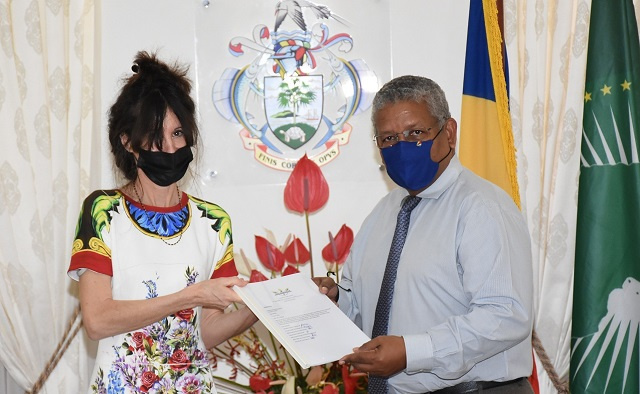 (Seychelles News Agency) - The Seychelles' Truth, Reconciliation and National Unity Commission expects to complete a reparations policy by September this year which will determine how the victims of the island nation's 1977 coup d'etat will be compensated.

The chairperson of the Commission, Australian Gabrielle McIntyre, made the announcement after presenting the TRNUC's fourth report to President Wavel Ramkalawan on Monday.

The Truth, Reconciliation and National Unity Commission was established in 2018 to work on settling past political divisions and grievances that were a result of the coup d'etat in Seychelles on June 5, 1977. Its mandate will end next August.

"It's not our role to pay the victims but we make the policy, so we are working on a reparations policy. We've had some international assistance in doing research for that policy. So we hope to have it completed by September," explained McIntyre.

She said that the raising of funds will be for other organisations as it is not within the mandate of the Commission.

McIntyre, who was accompanied by the other commissioners on TRNUC, said that they have discussed the report which is "an update of our progress, challenges ahead and the completion of our mandate."

"It's a wide-ranging report so it identifies our achievements, challenges and discusses amnesty, reparations, challenges going forward. It gives timelines in respect to how long it will take to complete certain aspects of our work," she added.

The Commission is also requesting more funds in the upcoming budget which will help them with human resources and other logistics. Its actual budget is SCR12 million ($804,000) and TRNUC is requesting an additional SCR20 million ($1.35million)

"The Commission has always been under budget. From the beginning, it hasn't had sufficient resources to carry out all of its responsibilities. We are asking for this extra budget so that we can meet our objectives for the under-resourcing of the last two years of the mandate," said McIntyre.

She added that the Commission will continue to do its best like it always had and is calling on more volunteer support.

"We will do whatever we can to still meet our objectives regardless of our resource problems. We will have to prioritise, things will not be done to the rigour that we would like them to be done," said McIntyre.

The commission is set to complete its mandate on August 9, 2022, although McIntyre explained that there will be some work left to do after handing in the final report.

"Once we hand over that final report we will still have the record of the Commission that needs to be put in order so that it will be accessible," she said.

General » Be a reporter: Write and send your article » Subscribe for news alert
Tags: coup d'Etat