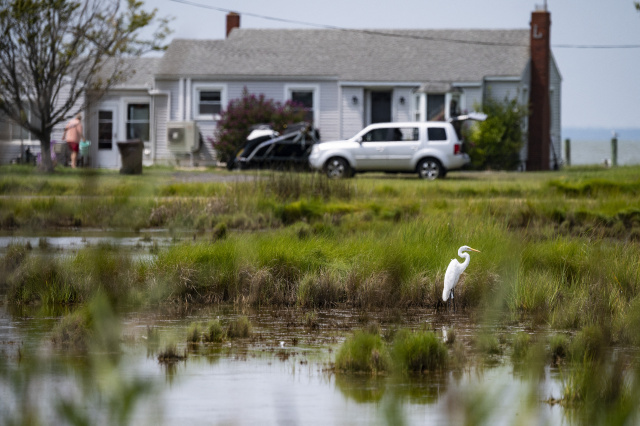 A bird wades through eroded land near a home on Hoopers Island, Maryland on August 9, 2021, where the evidence of climate change is being felt. The United Nations' Intergovernmental Panel on Climate Change just released a new report, and the message is clear: Deadly and irreversible effects of climate change are already here. Unlike previous assessments, the report also concludes it is "unequivocal" that humans have caused the climate crisis. (JIM WATSON / AFP)

(AFP) - Dozens of small island states most vulnerable to the effects of climate change have called on the world to save "our very future" after a landmark UN report said accelerating global warming and rising sea levels threaten their existence.

The call to action comes after the climate report warned that catastrophic global warming is occurring far more quickly than previously forecast, an assessment met with horror and hopefulness by world leaders and green groups.

"We have to turn this around," Diann Black-Layne, lead climate negotiator for the Alliance of Small Island States (AOSIS) and ambassador of Antigua and Barbuda, said in a statement late Monday.

It said the report confirmed that governments around the world must take critical action to cap warming to the 1.5C temperature goal of the 2015 Paris Agreement.

The UN's Intergovernmental Panel on Climate Change report, published on Monday, said the world is on course to reach that level around 2030, a decade earlier than predicted just three years ago.

That level of global warming will have devastating impacts on humanity, including more extreme weather events such as fires, typhoons, droughts and floods.

In its first major scientific assessment since 2014, the IPCC said by mid-century, the 1.5C threshold will have been breached across the board, by a tenth of a degree along the most ambitious pathway, and by nearly a full degree at the opposite extreme.

Many world leaders reacted to the report by calling for immediate action to curtail the rise of the world's temperature.

But Australia's conservative prime minister rejected growing calls on Tuesday to adopt more ambitious emissions targets, while China insisted it was implementing its climate commitments and signalled no new policies despite the report's findings.

General » Be a reporter: Write and send your article » Subscribe for news alert
Tags: UN, IPCC