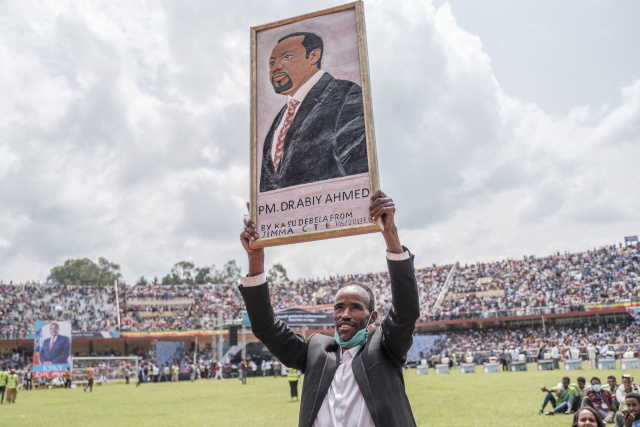 A man holds a portrait of Ethiopian Prime Minister Abiy Ahmed in a stadium in Jimma on June 16, 2021 for an electoral campaign rally ahead of the June 21, 2021 vote. (EDUARDO SOTERAS / AFP)

"Now is the right time for all capable Ethiopians who are of age to join the Defense Forces, Special Forces and militias and show your patriotism," Abiy's office said in a statement released less than two months after he declared a unilateral ceasefire in the war against Tigrayan rebels.

Northern Ethiopia has been wracked by violence since November after Abiy, the 2019 Nobel Peace Prize winner, sent troops into Tigray to topple its regional ruling party, the Tigray People's Liberation Front (TPLF), vowing a swift victory.

But nine months later, the TPLF has made advances into the neighbouring Afar and Amhara regions, while aid workers struggle to reach cut-off populations, with 400,000 people facing famine-like conditions in Tigray, according to the UN.

On Tuesday, the government's patience appeared to have run out, with Abiy ordering security forces "to halt the destruction of the treasonous and terrorist TPLF organisation and the machinations of foreign hands once and for all".

Those unable to enlist could contribute in other ways, including "providing supplies and moral support for the army", the statement said.

"Every Ethiopian must work closely with the security forces in being the eyes and ears of the country in order to track down and expose spies and agents of the terrorist TPLF."

As the fighting drags on, the humanitarian toll has spiked, with thousands killed and at least two million others forced to flee.

Both sides are trading blame for civilian casualties.

A medical official in Afar told AFP Tuesday that 12 people were killed and dozens wounded in an attack on displaced civilians.

The incident occurred on August 5 in Galicoma town, said Dr Abubeker Mahammud, medical director of the Dubti Referral Hospital, where victims were being treated.

Survivors told hospital officials they had been shot by TPLF fighters, he added.

Two officials with Afar's regional government put the death toll in Galicoma at more than 200, but the figure could not be independently verified.

The head of the UN children's agency UNICEF, Henrietta Fore, said Monday she was "extremely alarmed by the reported killings of over 200 people, including more than 100 children, in attacks on displaced families" in Afar.

A UNICEF spokesman said Tuesday said it had received "credible information from partners" about the attacks and that various UN agencies were planning to assess the site "as soon as security permits".

Ethiopian officials have seized on the Galicoma deaths as proof of the TPLF's disregard for the worsening humanitarian situation in Tigray.

But TPLF spokesman Getachew Reda said on Twitter Monday that government troops "launched an offensive on August 5 against our forces in Galicoma".

He said the TPLF would "investigate any incident that may have occurred".

Aid agencies have warned of dire days ahead as humanitarian access remains hamstrung by security woes.

On Tuesday the UN refugee agency UNHCR said it had regained access to two Eritrean refugee camps in Tigray for the first time since July 13.

Although aid deliveries resumed on August 5, UNHCR spokesman Boris Cheshirkov told reporters in Geneva that access to the camps, which house 23,000 people, remains "limited by a complex and fluid security situation".

"Basic services such as healthcare remain unavailable, and clean drinking water is running out."

Abiy, who has claimed his November offensive came in response to TPLF attacks on federal army camps, has accused the rebels of seeking to destroy Ethiopia.

The TPLF has repeatedly said it does not intend to hold territory in Amhara and Afar and instead wants to facilitate aid access and prevent pro-government forces from regrouping.