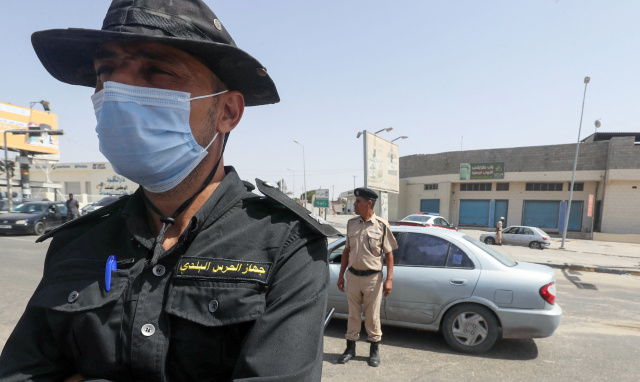 Libyan security officers man a check point to verify the implementation of a total curfew the authorities announced a day earlier, to mitigate the spread of the COVID-19 pandemic, in the capital Tripoli on August, 7, 2021. (Mahmud TURKIA / AFP)

(AFP) - Delegates from war-torn Libya launched a new round of UN-led talks via video conference on Wednesday aiming to reach a compromise ahead of planned elections.

The meeting comes six weeks after the failure of negotiations held in Switzerland between the 75 participants from all sides gathered for the Libyan Political Dialogue Forum.

The United Nations Support Mission in Libya was forced to acknowledge the failure of that session after four days, due to a lack of consensus among the delegates.

On Wednesday, the forum will again try to agree on a constitutional framework to govern the crucial parliamentary and presidential elections in December.

Oil-rich Libya was plunged into chaos after dictator Moamer Kadhafi was toppled and killed in a 2011 NATO-backed uprising.

Under a UN-backed ceasefire agreed last October, an interim administration was established in March to prepare for presidential and parliamentary polls on December 24.

The agreement was widely hailed as "historic" at the time, but since then divisions have resurfaced, raising doubts about the likelihood that the elections can go ahead as planned.

General » Be a reporter: Write and send your article » Subscribe for news alert
Tags: Libya, politics