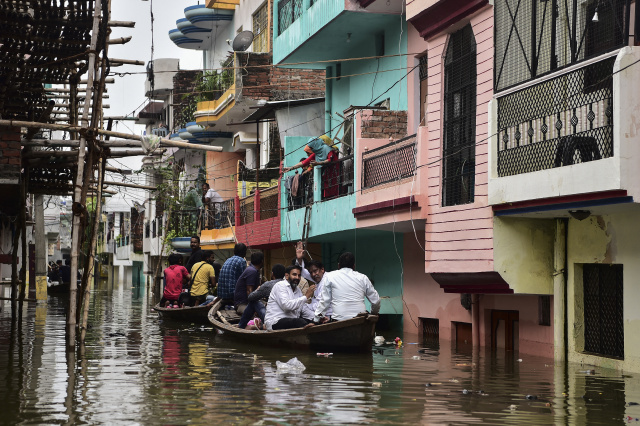 Residents use a boat to move in a flooded neighbourhood in Kareli Gaus Nagar area of Allahabad on August 12, 2021 following heavy monsoon rainfalls that caused the overflowing of the Ganges and Yamuna Rivers.
SANJAY KANOJIA / AFP

(AFP) - Thousands of stranded Indians were rescued Thursday from flooded villages along the Ganges after the river rose above its danger level in the country's most populous state.

The waterway surged to two metres (6.5 feet) above normal in the city of Allahabad, which has experienced its worst flooding in decades after days of torrential rain.

Across Uttar Pradesh state more than 600 villages were reportedly cut off by the rising waters, prompting a major rescue effort by authorities.

M.P. Singh, a district magistrate in Allahabad, told AFP that 225 boats had been sent out to help people trapped on rooftops and the upper floors of their homes.

He estimated 4,500 people had been rescued in and around the city.

About 100 kilometres (60 miles) downriver in the holy city of Varanasi, the ghats -- ceremonial piers used for Hindu cremations on the river -- were flooded and closed.

Varanasi magistrate Sanjay Kumar said the river was one metre (3.3 feet) above its danger mark in the area and thousands of people had been rescued.

Normally the ghats operate 24 hours and handle hundreds of cremations each day.

V.N. Mishra, head of Varanasi's Sankat Mochan Temple, said it was a "desperate" situation and people were instead lighting funeral pyres for the dead away from the river "even if it means cremating in back lanes and on rooftops".

The Uttar Pradesh government said 940 flood shelters had been set up for the homeless where food rations were being handed out.

Hundreds have died in India's monsoon season since June, with the states of Maharashtra and West Bengal badly hit.

General » Be a reporter: Write and send your article » Subscribe for news alert
Tags: India, weather