US, UK to launch evacuation flights as Taliban advance across Afghanistan 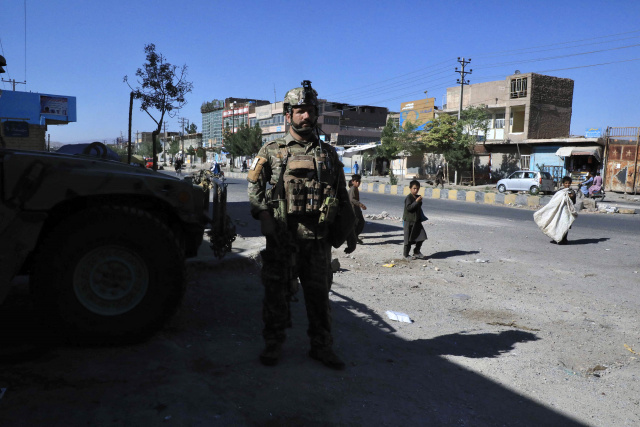 An Afghan security force personnel stands guard along the roadside in Herat on August 12, 2021, as Taliban took over the police headquarters in Herat, Afghanistan's third-largest city and also seized another key district capital just 150 kilometres (95 miles) from capital Kabul. (AFP)

(AFP) - The United States and Britain ordered Friday the deployment of thousands of troops to Afghanistan to evacuate their nationals, as the Taliban overran more key regional cities in an offensive that has left the capital dangerously exposed.

The orders came as the Taliban took control of Kandahar, the nation's second biggest city in the insurgency's heartland, leaving only Kabul and pockets of other territory in government hands.

"Kandahar is completely conquered. The Mujahideen reached Martyrs' Square," a Taliban spokesman tweeted on an officially recognised account, referring to a city landmark.

The claim was backed up by officials and a residents, who told AFP government forces had withdrawn en masse to a military facility outside the southern city.

Hours later, the Taliban said they had also taken control of the Lashkar Gah, the capital of neighbouring Helmand province.

A security source confirmed the fall of the city, telling AFP that the Afghan military and government officials had evacuated the city after striking a local ceasefire deal with the militants.

The government has now effectively lost control of most of the country, following an eight-day blitz into urban centres by the Taliban that has also stunned Kabul's American backers.

The offensive was launched in early May after the United States and its allies all but withdrew its forces from Afghanistan, with President Joe Biden determined to end two decades of war by September 11.

Biden has insisted he has no regrets with his decision, but the speed and ease of the Taliban's urban victories in recent days has been a surprise and forced new calculations.

Washington and London announced plans late on Thursday to quickly pull out their embassy staff and other citizens from the capital.

"We are further reducing our civilian footprint in Kabul in light of the evolving security situation," US State Department spokesman Ned Price told reporters, while noting the embassy would remain open.

The Pentagon said 3,000 US troops would be deployed to Kabul within the next 24 to 48 hours, underscoring that they would not be used to launch attacks against the Taliban.

Price said the United States would also start sending in daily flights to evacuate Afghan interpreters and others who assisted the Americans.

The conflict has escalated dramatically since May, when US-led forces began the final stage of their troop withdrawal.

After months of taking what were considered less strategically important rural areas, the Taliban zeroed in on the cities.

In the past week, the insurgents have taken over a dozen provincial capitals and encircled the biggest city in the north, the traditional anti-Taliban bastion of Mazar-i-Sharif, which is now one of the few holdouts remaining.

Pro-Taliban social media accounts have boasted of the vast spoils of war, posting photos of armoured vehicles, heavy weapons and even a drone seized by the insurgents at abandoned military bases.

After being under siege for weeks, government forces on Thursday pulled out of Herat -- an ancient silk road city near the Iranian border -- and retreated to a district army barracks.

Herat resident Masoom Jan told AFP the city's fall had been abrupt, saying the Taliban "entered the city in rush. They raised their flags in every corner."

On Thursday, the interior ministry also confirmed the fall of Ghazni, about 150 kilometres (95 miles) from Kabul and along the major highway to Kandahar and the Taliban heartlands in the south.

As the rout unravelled, three days of meetings between key international players on Afghanistan wrapped in Qatar without significant progress Thursday.

In a joint statement, the international community, including the United States, Pakistan, the European Union and China, said they would not recognise any government in Afghanistan "imposed through the use of military force."

Price called for a negotiated solution and reiterated Biden's frustration at the deteriorating situation, saying Afghan government forces outnumbered the Taliban by more than three to one after billions of dollars of US support over two decades.

Facing pressure at home, Biden was blasted by the top Republican in Congress on Thursday for his "reckless policy."