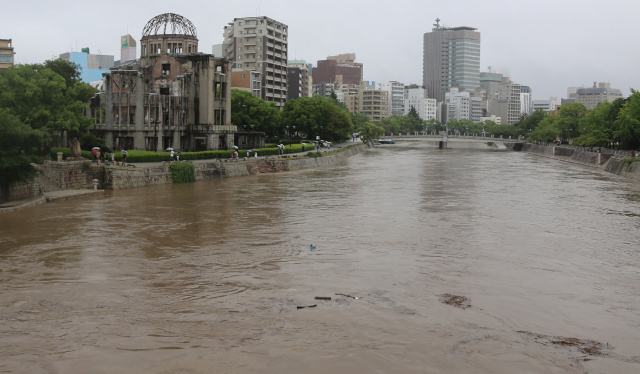 The Motoyasu River is seen beside the Atomic Bomb Dome (L) in Hiroshima City, where the water level rose due to heavy rains, on August 13, 2021. (STR / JIJI PRESS / AFP)

(AFP) - Tens of thousands of people were urged to evacuate on Friday as "unprecedented" levels of torrential rain hit western Japan, raising the risk of floods and landslides, the weather agency said.

The downpours are forecast to continue for several days over a large swathe of the country, from the northern Tohoku region to Kyushu in the south.

"There is a possibility that a grave disaster will occur" in the coming days, a Japan Meteorological Agency (JMA) official told an emergency news conference shown live on public broadcaster NHK.

In Unzen city in southern Nagasaki prefecture, two houses were hit by a landslide with one woman in her 50s feared dead, a local official told AFP.

The heaviest rain was in Hiroshima prefecture, where non-compulsory evacuation orders were issued to at least 69,500 people and the top flood alert announced.

In the city of Hiroshima, "we have issued a special heavy rain warning. This is a level of heavy rain that we have never experienced before", the JMA said in a statement.

The agency official also called the rain in some areas "unprecedented".

The land ministry warned that water levels are extremely high in three rivers -- two running through the Hiroshima region, and one in southern Kumamoto.

Scientists say climate change is intensifying the risk of heavy rain in Japan and elsewhere, because a warmer atmosphere holds more water.

Downpours last month caused a devastating landslide in the central resort town of Atami that killed at least 21 people.

And in 2018, more than 200 people died as floods inundated western Japan during the country's annual rainy season.

On Friday, the JMA said that in the 24 hours from 6am on Friday, 300 millimetres (12 inches) of rain is expected in the northern part of Kyushu, with 200 to 250 millimetres forecast in many other parts of the country.