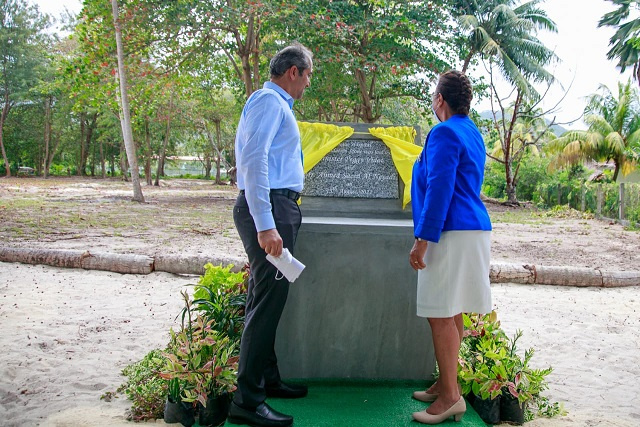 The stone was laid on Sunday August 15 coinciding with the Feast of the Assumption. (Salifa Karapetyan, Seychelles News Agency)

(Seychelles News Agency) - Construction on a state-of-the-art hospital on La Digue, the third most populated, is set to start with the laying of the foundation stone on Sunday.

"The hospital that will be built here is a modern one. In this new hospital, we have taken into consideration the needs of the people of La Digue. For example, there will be a dialysis unit in this hospital. We have planned for minor surgery, and x-ray, some facilities that we do not have in the current hospital," he outlined.

He added that there will be isolation rooms that will also cater to private patients. These rooms will also be used for terminally ill patients as a hospice so that families on La Digue can have the facility to be with their loved ones during those last moments.

In view of the size of the building, the new hospital will be built at L'Union Estate.

The hospital will be equipped with emergency rooms, operating rooms, laboratory, motherhood and childhood care facilities and a pharmacy.

The construction of the hospital is being made possible through a donation of around  $4 million from the United Arab Emirates (UAE) government and the La Digue Hospital Fund.

"The characteristics of La Digue attract tourists, honeymooners and even filmmakers from across the globe. We therefore strongly believe that it is imperative for La Digue to be equipped with a state-of-the-art hospital," said the charge d'affaire of the United Arab Emirates (UAE), Ahmed Saeed Alneyadi.

The hospital, which will be approximately 2,000 square metres, will occupy only half of the property, and as such, there will be space for expansion.

Ramkalawan said that "as future plans we want to have accommodations for nurses and doctors who come working here, helping cut costs."

An 80-year-old inhabitant of La Digue, Reine Ernesta, said that she is happy with the development.

"We had to travel a lot to get the care that I needed, both to Praslin and Mahe. Once the hospital opens, everything will be much easier," she continued.

Another inhabitant, Pierre Barbe, said that he has been waiting for this hospital for a long time and will help cut costs for the inhabitants of the island.

Ramkalawan also took the opportunity to call on the people of La Digue to examine the plan of the hospital and make suggestions on how to improve it.

The laying of the foundation stone coincided with the Feast of the Assumption of Virgin Mary on August 15 on La Digue. The festival usually includes a procession and mass as well as funfairs, music concerts and sporting events. But due to COVID-19, once again this year it was held on a smaller scale.

Health » Be a reporter: Write and send your article » Subscribe for news alert
Tags: Feast of the Assumption of Virgin Mary