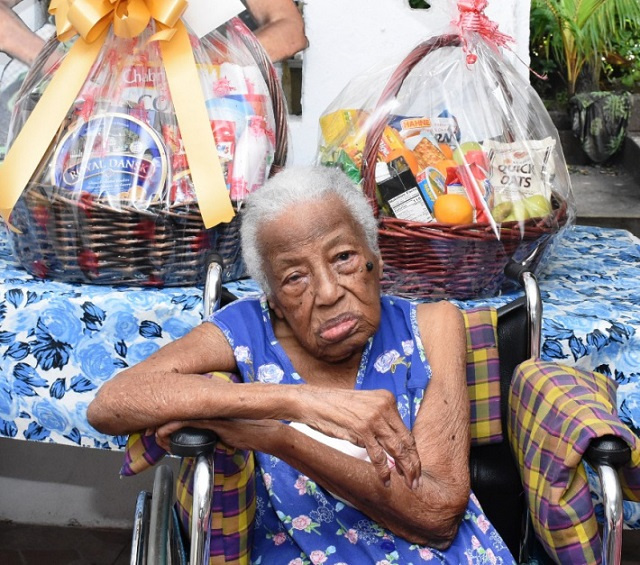 Pouponneau became the oldest resident of the 115-island archipelago in the western Indian Ocean following the death of Nancy Marie in May at age 112. (Seychelles Nation)

(Seychelles News Agency) - Margaret Woodfield Pouponneau celebrated her first birthday as the oldest citizen of Seychelles on Sunday as she turned 109.

The centenarian spent her special day with her surviving children and other members of her family at her residence in the central district of St. Louis on the main island of Mahe.

Pouponneau became the oldest resident of the 115-island archipelago in the western Indian Ocean following the death of Nancy Marie in May at age 112.

Born on August 15, 1912, in the southern district of Anse Royale, Pouponneau, who was born Gill, came from a family of seven. All her siblings, four brothers and two sisters, have since passed away. Her husband Wilby died in 1982.

A former language teacher, Pouponneau quit her job to take care of her own family – three daughters and a son. Her eldest daughter has passed away.

The centenarian later took up sewing and was a renowned seamstress who could sew school uniforms to wedding dresses.

The centenarian, who lives with her daughter, Daphnee, 81, shared a gospel song with her visitors who came to wish her well on her birthday. "There is a land of pure delight, Where saints immortal reign, Infinite day excludes the night, and pleasures banish pain," sang Pouponneau.

Pouponneau, whose birthday coincides with the La Digue Feast of the Assumption, also shared past incidents she experienced on the day.

In a past interview with the daily newspaper Seychelles Nation, the centenarian had said that she lived life to the fullest and had no regrets.

"I have travelled. I have raised my family. I have always been healthy. The only time I was in hospital was for my eyes but I have never been sick. I even gave birth at home with the help of midwives," she recounted.

She added that she did nothing special to attain such longevity. "I am the only one in my family to live to this age. My mother passed away aged 98," the centenarian told the Seychelles Nation.

Up until last year, the centenarian could still read her bible.

Back in January Seychelles had 11 citizen centenarians, but since then six have passed away. Apart from Nancy Marie, the others are Josephine Nicette, Francine Luther, Merancia Esther, sister Marguerite Savinia Vel, all of who were 100 years old, and Alda Philo, who was 105.

Nancy Marie holds the record as the oldest person on the islands.

People » Be a reporter: Write and send your article » Subscribe for news alert
Tags: Feast of the Assumption