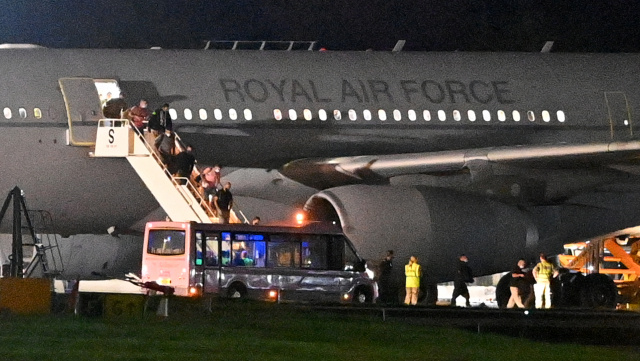 Passengers repatriated from Afghanistan, disembark from an RAF Airbus KC2 Voyager aircraft, after landing at RAF Brize Norton, southern England, on August 17, 2021. Britain is sending 900 soldiers back to Afghanistan over the coming days to help with repatriations and evacuations following the rapid Taliban takeover of the country. Officials are aiming to take 1,200 to 1,500 people from Afghanistan a day, with the first flight having landed at a British air force base on Sunday night.
(JUSTIN TALLIS / AFP)

The White House said Tuesday the Taliban had promised that civilians could travel safely to the Kabul airport as the US military stepped up its airlift for Americans and Afghans fleeing the Islamist group.

Some 3,200 people have been evacuated by the US military so far, a White House official said, including 1,100 on Tuesday alone -- US citizens, permanent residents and their families on 13 flights.

Earlier Tuesday, the White House had said that 11,000 US nationals remain inside the country, including diplomats, contractors and others, most waiting to be evacuated after the Taliban takeover.

Washington wants to complete the exodus before its August 31 withdrawal deadline, and thousands of US soldiers were at the airport as the Pentagon planned to ramp up flights of its huge C-17 transport jets to as many as two dozen a day.

"Now that we have established the flow, we expect those numbers to escalate," said the White House official who gave the updated evacuation figures Tuesday and who spoke on condition of anonymity.

US officials said they were in contact with Taliban commanders to ensure the flight operations at Hamid Karzai International Airport remained safe from attack and that citizens and Afghans seeking to leave had safe passage.

"We have had no hostile interactions, no attack and no threat by the Taliban," said Major General Hank Taylor said at the Pentagon.

But State Department spokesman Ned Price said Tuesday that the United States could decide to keep its core diplomatic presence, now operating out of the airport after the US embassy was shuttered, after August 31.

"If it is safe and responsible for us to potentially stay longer, that is something we may be able to look at," Price said.

He also called on the Taliban to follow through on promises to respect the rights of citizens including women.

Also being airlifted are Afghans granted US refugee visas, mostly for having worked as translators for American and NATO forces, other foreign nationals, and other unspecified "at risk" Afghans.

Despite some reports that people are being harassed and even beaten as they try to leave, White House National Security Advisor Jake Sullivan said "large numbers" had been able to reach the airport.

"The Taliban have informed us they are prepared to provide the safe passage of civilians to the airport, and we intend to hold them to that commitment," he told reporters.

The US Department of Defense has poured troops into the airport since Saturday to protect the exodus as the Taliban insurgents entered Kabul after a lightning siege across the country and seized power.

Taylor said the number of US troops would rise from 2,500 on Monday to around 4,000 by late Tuesday.

He said the United States aimed to increase its airlift to one plane an hour so that between 5,000 and 9,000 passengers could be carried out per day.

Some other countries, including Germany and France, have also been able to pick up their nationals and Afghans qualified to travel to those countries.

Taylor spoke a day after security broke down at the airport, with videos showing hundreds of Afghans running next to a C-17, some clinging to it.

Videos appeared to show two people falling to their deaths from one aircraft after it took off. Another person was later found dead in a wheel well.

US Air Force spokeswoman Ann Stefanek said they were investigating the incidents.

"Before the air crew could offload the cargo, the aircraft was surrounded by hundreds of Afghan civilians," she said.

"Faced with a rapidly deteriorating security situation around the aircraft, the C-17 crew decided to depart the airfield as quickly as possible."

General » Be a reporter: Write and send your article » Subscribe for news alert
Tags: Afghanistan, US