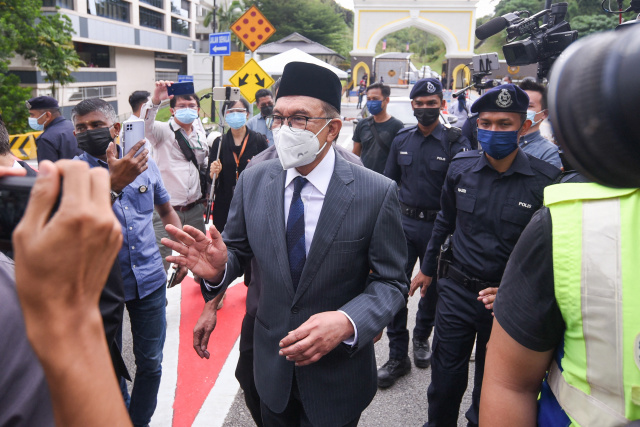 (AFP) - Malaysia's king on Tuesday urged rival politicians to unite to battle a worsening coronavirus outbreak as the hunt began for a new prime minister, an opposition leader said.

Analysts said the monarch, who appoints the premier, was trying to push the country's political parties towards forming a unity government following Muhyiddin Yassin's resignation Monday.

Following a turbulent 17 months in office, Muhyiddin finally quit when he lost his parliamentary majority and amid mounting public anger at his government's handling of Malaysia's worst Covid-19 wave.

The king, Sultan Abdullah Sultan Ahmad Shah, has ruled out elections due to the outbreak, meaning it will likely be up to him to pick the next premier based on who commands most support.

But there is no clear successor for 74-year-old Muhyiddin, as no alliance has majority backing in parliament.

An opposition bloc is pushing for Anwar Ibrahim, remnants of Muhyiddin's collapsed government may try to build a coalition, while some have proposed a unity administration until the outbreak is under control.

After a meeting at the national palace with other party chiefs, long-time opposition leader Anwar said the king had told them "the country is a facing political and constitutional crisis".

"So we should unite to fight the coronavirus and help bolster the economy."

"By the look of it, all the parties seem to have come to a consensus -- that is to end 'old politics'... and focus on the development of the country," he added.

The monarch was accompanied by the influential deputy king at the meeting.

This indicated agreement among Malaysia's revered Islamic royal families "with regards to the proposal for a unity government", said Oh Ei Sun, an analyst at the Singapore Institute of International Affairs.

MPs have also been asked to submit the name of their choice for prime minister to the palace by Wednesday afternoon, and the drama is expected to take several days to play out.

A premier must have the support of at least 111 MPs out of 222 in the lower house of parliament.

Malaysia's political landscape has been in disarray since polls in 2018 that saw a scandal-plagued coalition ejected after six decades in power, and replaced by a reformist alliance.

But that alliance collapsed, and Muhyiddin came to power in March last year without an election.

His government was unstable from the outset, however, with a razor-thin majority in parliament and facing constant questions over its legitimacy.

General » Be a reporter: Write and send your article » Subscribe for news alert
Tags: Malaysia, politics