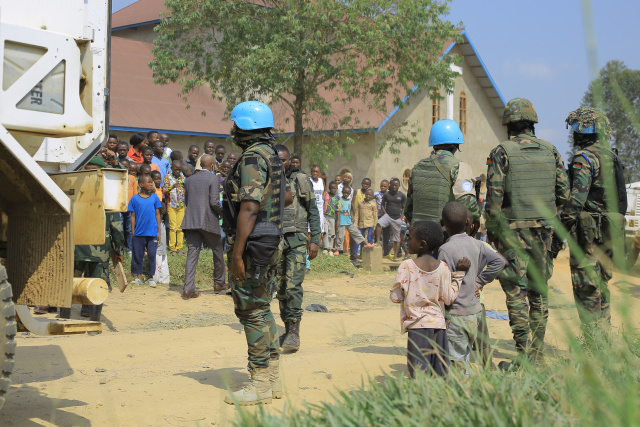 Malawian peacekeepers of The United Nations Organization Stabilization Mission in the Democratic Republic of the Congo (MONUSCO) stand guard outside the Emmanuel Butsili Catholic church in Beni, on June 27, 2021, after a makeshift bomb exploded, injuring two just an hour before a children's Confirmation ceremony was due to be held. (Sébastien KITSA MUSAYI / AFP)

(AFP) - DR Congo's army says it has seized the "last strongholds" of a rebel force after several days of fighting in the troubled eastern province of South Kivu.

The clashes erupted in the province's highlands on August 12, when the military said it had responded to attacks by a coalition of the Makanika, Twigwaneho and Ngumino armed groups.

The groups consist of members of the Banyamulenge community -- Congolese Tutsi with distant origins in neighbouring Rwanda.

In Fizi territory, "the army has recovered all the villages formerly occupied by the rebels, including the last strongholds of these armed groups led by the deserter Colonel Michel Rukundo, alias Makanika," army spokesman Captain Dieudonne Kasereka said Wednesday.

He claimed a "victory of the FARDC" -- the armed forces of the Democratic Republic of Congo -- and said calm had been restored in the area.

"Among these villages are Muranvya, Shakira, Maramara and Kamombo, which fell to the FARDC between Saturday and Monday after heavy fighting," he said.

"Makanika and his followers fled to Bijabo forest" after burning down a number of houses, Kasareka reported.

Rubibi Saint-Cadet, representing civil society groups in Minembwe, said the clashes had "caused massive population displacement" into the bush and the forest.

"We are issuing an SOS to the authorities and humanitarian organisations to come to their aid," he said.

The army has not released updated casualty figures from the fighting since on Saturday declaring that 18 rebels had been killed and 48 wounded, while seven soldiers were killed and eight wounded.

The highlands region is the focus of conflicts between armed groups formed along community lines, notably the Banyamulenge people and the Bafuliro, Babembe and Banyiundu.

A coalition between the Twigwaneho (meaning "self-defence") and "Ngumino" ("We are staying here") groups was joined by Makanika, who deserted from the Congolese army in early 2020 with a group of soldiers.

Africa » Be a reporter: Write and send your article » Subscribe for news alert
Tags: DRCongo, unrest