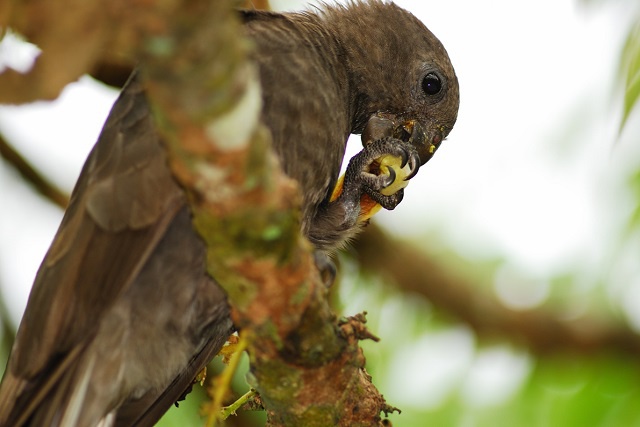 (Seychelles News Agency) - What is the favourite food species of Seychelles Black Parrots?

Those of you who have long thought that introduced fruit trees like mangos or papaya must be the top choice would be wrong! It appears that the sombre-coloured, medium-sized bird, endemic to the Indian Ocean archipelago, favours endemic and native species.

This had been revealed in a new research paper published online on August 26, 2014 by Ostrich: Journal of African Ornithology that examines the feeding ecology of these endemic parrots.

Their paper summarises the findings of 4 years of feeding observations of Black Parrots by staff of the Seychelles island Foundation on the Seychelles second most populated island of Praslin, home to the entire Black Parrot population which is about 520–900.

According to the recently published September issue of the SIF Newsletter the authors compared two alternative methods of recording feeding data; incidental observations and feeding transects, to assess methods as well as the parrots’ feeding preferences.

“Incidental observations (recorded opportunistically whenever staff saw parrots feeding) resulted in many more recorded feeding encounters than did transects, but the transect results are more reflective of actual feeding patterns.”

According to the SIF both methods have their benefits and drawbacks. It was observed that while the transect method produces less but more representative data, the incidental method is highly biased but useful for collecting data quickly, and identifying rare feeding events.

The authors of the new research paper have therefore concluded that the methods are complementary and each can be useful depending on the information needed and the questions asked.

“Following this research, we now know that, although the Black Parrots are regularly seen eating introduced fruit, such as papaya and starfruit, these sightings are simply more visible to most people since they occur in gardens and farmland, leading to the mistaken impression that these fruit trees are preferred,” says SIF.

SIF states that understanding feeding requirements is vital for species conservation, particularly for rare endemics like the Seychelles Black Parrots which are restricted to very small areas, as it will help the organisation to better understand how to manage their habitat to ensure the survival of the species.

Established by the government under the Seychelles Island Foundation Decree of 1979, SIF is a public trust that manages and protects the archipelago’s UNESCO World Heritage Sites of Aldabra situated 1,150km from the main island of Mahé and Vallée de Mai, on Praslin.

Vallée de Mai where grows the biggest seed in the world, the Coco de Mer provides the perfect breeding and nesting grounds for the Black Parrot with its endemic palm forests.

The study has therefore also reinforced the need to protect the endemic palm forests of the Vallée de Mai as it confirms that the Black Parrot is heavily dependent on the native palm forest, not only by nesting in Coco de Mer trunks but by feeding on the other palm species.

With this improved understanding of the feeding requirements of the Seychelles Black Parrot SIF says, conservation managers will be in a position to make more informed conservation decisions.