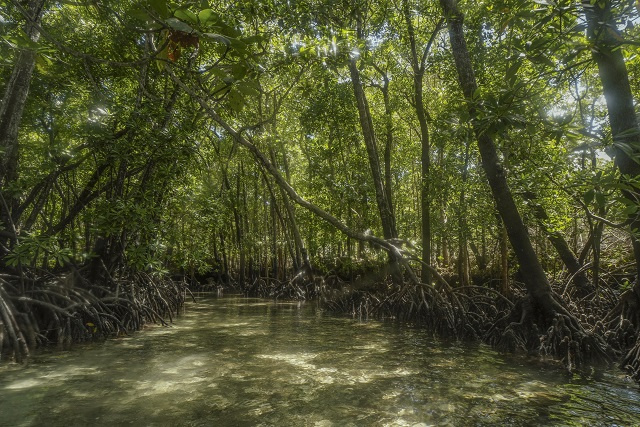 Aldabra Atoll hosts the largest area of mangroves in the island nation in the western Indian Ocean and has been strictly protected since 1976. (Seychelles Islands Foundation)

(Seychelles News Agency) - The mangrove coverage area on the remote Aldabra Atoll has increased by around 60 hectares since 1997, the Seychelles Islands Foundation (SIF) said recently.

A study compared satellite imagery captured over Aldabra from 1997 to 2018. While mangrove habitats across the world are in decline, the study found that the protected mangrove forest on Aldabra has expanded over the past two decades.

The chief executive of SIF, Frauke Fleischer-Dogley, said that over just 20 years the increase in mangrove area found on Aldabra Atoll is slightly larger than the whole district of Grand Anse Praslin.

"This remarkable increase shows the potential of our protected areas in Seychelles to raise finance as blue carbon capital that will not only fund our work to manage our protected areas but also assist the local community to develop sustainable business models based on our intact environment," said Fleischer-Dogley.

The Aldabra Atoll, one of the Seychelles' World Heritage sites, hosts the largest area of mangroves in the island nation in the western Indian Ocean and has been strictly protected since 1976. Mangrove habitat covers more than 11 percent of Aldabra's total land area.

The results highlight the importance of the protection of this valued habitat and underscores the ecological importance of Aldabra on a regional level.

The study was conducted by researchers from the University of Zurich and the Seychelles Islands Foundation (SIF), which manages the Aldabra Atoll.

Lead author and University of Zurich and SIF researcher, Seychellois Annabelle Constance, said, "While we know a lot about the importance of mangroves, we still need to better understand the factors that influence their extent, which in simple terms means where mangrove forests have grown, died or remained stable over time. In that regard, our study is helping to better protect these valuable forests by highlighting what impacts their extent."

The researchers also found an effect of the wave power on mangrove extent stability. Lower wave power values were recorded for stable mangrove areas than for areas that had gained or lost mangroves from 1997 to 2018.

The results confirm that local mangrove extent is vulnerable to threats of sea level rise that will likely exacerbate the impact of waves on atolls by allowing larger, more powerful waves to reach the coastline.

Seven species on mangroves were recorded on Aldabra and they support several globally threatened and endemic populations of terrestrial and marine species, including the largest breeding population of frigatebirds in the Indian Ocean.

Despite being protected, Aldabra's mangroves are vulnerable to climate change impacts reported within the Indian Ocean. Sea level rise impacts mangroves through erosion, decreasing the oxygen available for the plants to breathe and promoting toxic soil growing conditions for the plant.