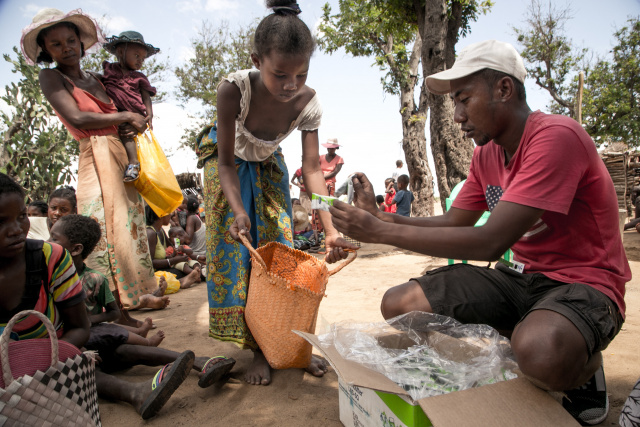 A worker from the NGO Action Contre la Faim distributes food supplements for infants in the municipality of Ifotaka, in southern Madagascar, on December 14, 2018. In the village of Ifotaka, at the southern tip of Madagascar, the noise and excitement of the country's election campaign seems far away as locals confront more pressing needs in a daily struggle for food. For several seasons now, the entire southern part of Madagascar has been caught up in a drought that has made water increasingly scarce, wrecking even efforts to grow rice -- the staple food. (RIJASOLO / AFP)

(AFP) - Madagascar on Friday restored global medical charity MSF's access to the country, where borders have been shut since the start of the pandemic, allowing relief work in the famine-hit south.

Teams from Medecins Sans Frontieres had lost their special authorisation to continue travelling to the Indian Ocean island nation, shuttered since March 2020, when the government reinforced coronavirus restrictions in July.

The inability to renew their visas would have ended food distribution and assistance to more than a million people hit by a devastating famine in an area the size of Bulgaria of Cuba.

"Nine new visas have been delivered thanks to action taken by the authorities, which will allow us to continue with food distributions and our response to malnutrition," MSF said in an emailed statement.

Madagascar authorities had previously failed to respond to requests for renewed humanitarian access.

The government has been operating in famine-hit districts for severals months alongside MSF, the World Food Program and other aid organisations.

Soldiers have also been deployed to distribute food and first aid.

Below-average rainfall and sandstorms have caused a succession of crop failures in areas where most people live off their land.

The United Nations has blamed global warming and warned the next dry season, starting in October, would likely aggravate the situation.