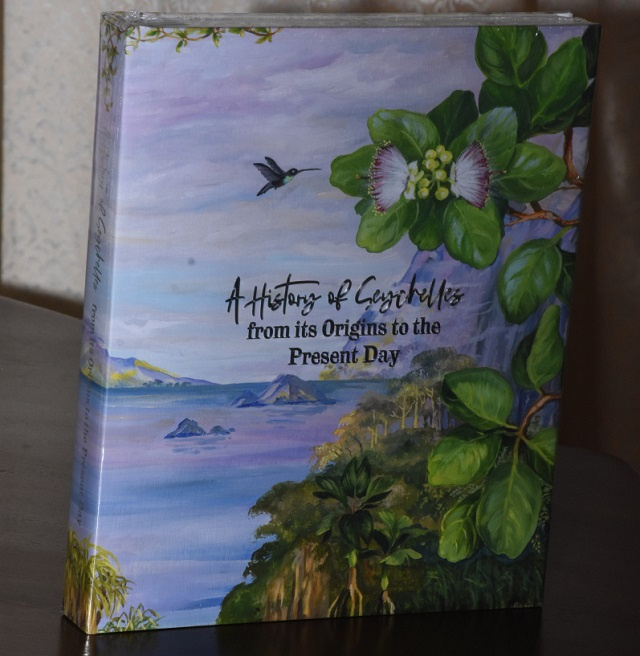 The book is described as an exclusive production, lavishly illustrated holding a wealth of knowledge for students, adults and visitors. (Seychelles Nation)

(Seychelles News Agency) - Seychelles' oldest recorded document -- dated 1771 and signed by Pierre Poivre, the French administrator credited with having introduced spices to the islands – can now be publicly seen in a new book: "A History of Seychelles from its Origins to Present Day."

The recently launched commemorative book contains documents pertaining to the history of the island nation seen by only a few people. It is described as an exclusive production, lavishly illustrated holding a wealth of knowledge for students, adults and visitors.

"It has in-depth information about various aspects of our history, illustrations and documents that have never been published before, plus the first couple of chapters pertaining to the pre-discovery period is a wealth of information and maps illustration," explained local historian Tony Mathiot.

Mathiot – one of the nine contributors in the 3 kg book – told SNA: "In my chapter for example you get to see the oldest document that we have in our archives: This is the 1771 document pertaining to the establishment of the parish of Padua in Mahe. It is signed by Pierre Poivre."

He added that the book also contains the ordinance that established the name of Seychelles' capital town, Victoria, in 1841. "It contains more than a few historical jewels. The book is a noble gift to Seychelles, to us, to posterity," said Mathiot.

President Wavel Ramkalawan was the first to receive a copy of the book at its launch at State House in July. Originally planned As part of activities to commemorate the island nation's 250th anniversary in August 2020, the commemorative book was delayed due to the COVID-19 pandemic.

Ramkalawan said that the publication will now form part of the official records about the history of Seychelles – 115 islands in the western Indian Ocean - whereby generations to come will be able to know where the first settlement started and how the history of the nation unfolded.

The book is divided into four parts with detailed information on different eras. It covers the historical background of the 1770 settlement, the French period up until 1814 and the British period up until independence in 1976.

It also has information related to the modern period, including last year's elections. Some of the documents featured in the book are from the Paris Archives and the Coromandel Archives of Mauritius.

"As such, it details the milestones in our evolution as a nation, cataloguing along the way the many challenges we have faced, and overcome. Perhaps, it is a timely reminder to us that although today we face a major challenge in the form of COVID-19, we have faced and overcome such challenges before and we should take courage in that," said Sherin Francis, who chaired the 250th anniversary committee.

The book is the work of a team of 21 people consisting of researchers, graphics and visual artists. The editor-in-chief, Glynn Burridge, highlighted how intense the work for the team to conceptualize the book project but expressed how incredibly proud they are of the final end product they managed to produce.

According to Francis the book also represents a sound body of historical facts for researchers, universities, schools and history enthusiasts the world over and, "as such, promises to enjoy great longevity. In addition, it could be used as an important tool in the marketing of Seychelles abroad."