US, allies race against time in chaotic Kabul evacuation 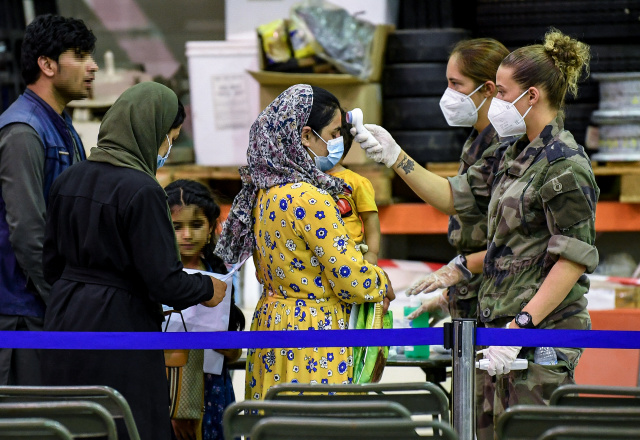 A French soldier checks the temperature of a woman as people wait in a reunion and evacuation center at the French military air base 104 of Al Dhafra, near Abu Dhabi, on August 23, 2021, after being evacuated from Kabul as part of the operation "Apagan". (BERTRAND GUAY / AFP)

(AFP) - The United States and allies were on Saturday racing against "time and space" in the increasingly chaotic and dangerous bid to evacuate people from Taliban-held Afghanistan, with the EU warning it may be "impossible" to get everyone out in time.

Six days after the Taliban swept to power, tens of thousands of people were still trying to leave the country in what has been dubbed one of the most difficult airlifts in history.

As desperate people, including children, wait for hours and days in the heat and crush outside the US-controlled Hamid Karzai International Airport, the delay has turned deadly for some.

Britain's Sky News on Saturday aired footage of at least three dead bodies covered in white tarpaulins outside the airport. It was not clear how they had died.

Sky reporter Stuart Ramsay, who was at the airport, called the deaths "inevitable" and said that people at the front of one part of the crowd were being "crushed", while others were "dehydrated and terrified".

The footage was the latest image of utter despair, after video of a baby being lifted over a wall at the airport and horror scenes of people hanging onto departing planes.

Families hoping for a miracle crowded between the barbed-wire that surrounds an unofficial no man's land separating the Taliban from US troops. Roads to the airport were choked with traffic.

"Please, please, please help me... where should I go, what should I do," one man, who said he worked for the US embassy in the mid-2000s, wrote on a WhatsApp group for people to share information on how to get out.

Pentagon spokesman John Kirby conveyed a sense of urgency as the military aims to complete the evacuations by August 31.

"We know that we're fighting against both time and space," he said.

Others saw it as another losing battle.

"They want to evacuate 60,000 people between now and the end of this month. It's mathematically impossible," European Union foreign policy chief Josep Borrell said.

Speaking to AFP, Borrell added that "we have complained" to the Americans that their airport security was overly strict and hampering attempts by Afghans who worked for the Europeans to enter.

"Planes are leaving while people are still on the tarmac," he said.

Biden has said the deadline could be extended for the airlifts. Borrell said that as far as he knew that decision had not yet been made.

The United States urged its citizens still in Afghanistan to avoid the airport unless told otherwise, citing "potential security threats" near its gates.

A White House official later confirmed that aides had briefed President Joe Biden on "counterterrorism operations" in Afghanistan, including against the Islamic State group, which remains active in Kabul.

There have also been reports of Taliban militants beating and harassing Afghans trying to reach the airport.

Up to 15,000 Americans need to be evacuated and the administration hopes to get out a further 50-60,000 Afghan allies and their families. Other countries are also hoping to save thousands of people.

On Saturday the Pentagon said 17,000 people had been taken out since the operation began on August 14, including 2,500 Americans.

Thousands more have fled on other foreign military flights.

Outside the airport, Taliban leaders gathered in the Afghan capital Saturday to begin mapping out an "inclusive government".

But the gathering also included top officials from the Haqqani network, a US-designated terrorist organisation with million-dollar bounties on its leadership.

The mountainous Panjshir Valley remains the only holdout against the Taliban.

But, also on Saturday, pro-Taliban social media feeds posted a video of Khalil Haqqani of the Haqqani network claiming Massoud's son had "declared allegiance" to the new Islamic emirate.

There has been no statement from Massoud.

The Taliban swept into Kabul last week, ending two decades of war, stunning the world as government forces surrendered en masse and raising questions about the US ability to support its allies.

Former UK prime minister Tony Blair, who in 2001 took Britain into war in Afghanistan alongside the United States, on Saturday criticised the US motives for the withdrawal as "imbecilic" and "driven not by grand strategy but by politics".

The Taliban have promised "positively different" rule from their 1996-2001 regime, infamous for an ultra-fundamentalist interpretation of Islamic law, and vowed not to seek revenge on Afghans who worked with the US-backed government.

But an intelligence document for the United Nations said militants were going door-to-door hunting former government officials and those who worked with US and NATO forces.

There was one scene of normality in the capital made surreal by the chaos and fear surrounding it: Afghanistan's national cricket team were pictured Saturday at a training session in Kabul.

They are due to meet Pakistan for a one-day series set to take place in Sri Lanka in two weeks.