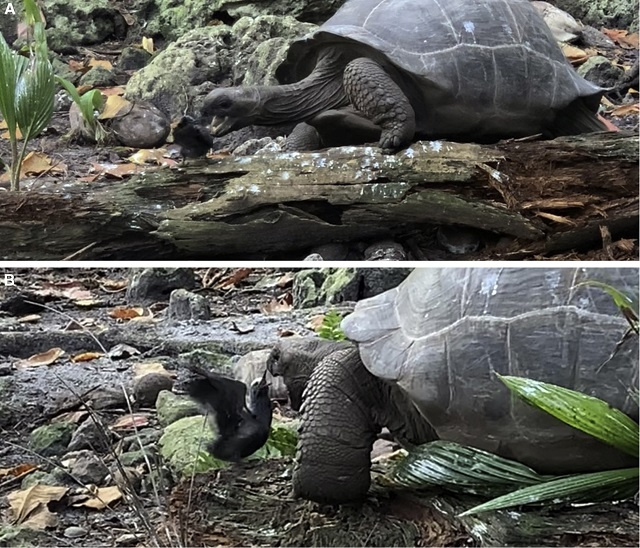 The video captured so much attention in part because giant tortoises were not previously known to hunt living prey. (Anna Zora)

The video captured so much attention in part because giant tortoises were not previously known to hunt living prey. The video and an article detailing the event was released in the Science Direct journal earlier this week.

Anna Zora, the deputy conservation manager on Fregate, told SNA on Wednesday that she shot the video in July last year.

"About one year ago, I and the team that was here on Fregate island were censusing seabirds when we saw a tortoise behaving strangely. So we decided to find out what was happening and there was this tortoise stalking a lesser noddy chick which was in a log. I started taking pictures then I realised I needed to document this so I started filming," said Zora.

"The tortoise went straight to the chick which tried to move along the log several times to protect itself but the tortoise kept coming until it managed to kill the chick and then ate it. It took around seven minutes," she added.

Zora said giant tortoises are scavengers and eat dead birds and dead lizards or whatever they find on the floor but that was the first time a hunting tortoise was recorded and documented.

Zora said she got in touch with Dr. Justin Gerlach, director of studies at Peterhouse, Cambridge and affiliated researcher at the University of Cambridge's Museum of Zoology.

"He couldn't believe what I was saying so I said I will send you the video. So when he realised that the tortoise was actively hunting then he said we will put together an article and we will publish it," said Zora.

She said the publication of the article was delayed due to the COVID-19 pandemic constraint "and with Justin being over in London, it took us some time and this is I why the article came out almost a year after the event."

In an article in the Science News independent journal, Gerlach said that "this was totally unexpected behaviour" and described the video "as amazing and slightly horrifying."

In their article in Science Direct, Zora and Gerlach said that the documented observation noted that during the attack the tortoise approached the chick with its jaws wide open and the tongue retracted.

"This is typical for aggressive tortoise behaviour and is in contrast to feeding behaviour where the tongue is protracted in all chelonians feeding on land. This indicates that this type of interaction is not infrequent for this individual. The observation of other tortoises hunting and consuming birds suggests that this behaviour has been adopted by several individuals," the article stated.

Zora and Gerlach will put forward a request with the University of Cambridge to come and do proper research on the behaviour of the tortoise.

"At present, we do not know how extensive the behaviour is on Fregate; future studies will determine whether it develops further or expands more widely in the tortoise population. Even if Frégate's combination of tree-nesting terns and giant tortoise populations may be exceptional, the present observation considerably expands the known behavioural repertoire of tortoises," said Zora and Gerlach.

Fregate is a privately owned island in the Seychelles archipelago in the western Indian Ocean that is managed for ecotourism.

The 2021 tortoise census on the island recorded about 3,000 individuals. These are a mixture of animals believed to have been introduced from Aldabra atoll in the 1950s, animals released from captivity from other islands and those wild bred on Fregate.

The extensive habitat restoration that has taken place on Fregate has enabled seabirds to recolonise, with a colony of 265,000 noddy terns in an area of 1.9 hectares.

General » Be a reporter: Write and send your article » Subscribe for news alert
Tags: University of Cambridge