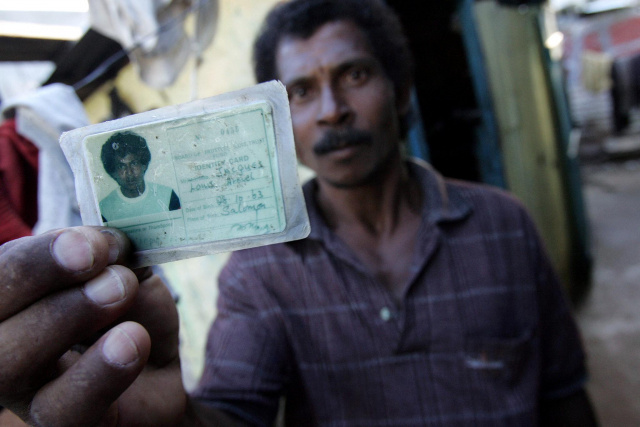 Jaques Louis Arniel shows, 17 January 2005 in Port Louis, Mauritius, his identity card stating his birth place as the Solomon Island, Chagos. Arniel, like all his fellow islanders were removed from the Chagos chain after Britain decided in 1965 to keep the chain of islands as British Independent territories for their strategic purposes. The largest island, Diego Garcia was leased by the British to the US in 1975 and has reportedly become the site of a highly classified military prison where high value Al-Qaeda suspects have been interrogated. The islanders have been fighting for adequate compensation but above all the right to return. (AFP PHOTO/MARCO LONGARI)

(AFP) - Mauritius has welcomed the UN postal agency's decision to ban British stamps from being used on the Chagos archipelago, calling it a victory for the island nation in its decades-long dispute with London.

The vote by the Universal Postal Union (UPU), a United Nations agency focusing on the mail sector, follows a longstanding spat between Mauritius and Britain over the Chagos Islands, where London and Washington operate a joint military base.

"This is another big step in favour of the recognition of the sovereignty of Mauritius over the Chagos," Mauritian Prime Minister Pravind Jugnauth said late Wednesday.

Although Mauritius became independent in 1968, the Chagos archipelago remained under British control, sparking protests by Chagossians, who accuse London of carrying out an "illegal occupation" and barring them from their homeland.

Following Tuesday's vote, "the UPU will stop registering, distributing and transmitting stamps" bearing the words British Indian Ocean Territory (BIOT), the name given by Britain to the archipelago, Jugnauth said.

In 2019, the International Court of Justice ruled that Britain should give up control of the islands.

Later that year, the UN General Assembly adopted a resolution recognising that "the Chagos Archipelago forms an integral part of the territory of Mauritius" and urged UN agencies "to support the decolonization of Mauritius".

The British Foreign Office said it was "disappointed" by Tuesday's vote, which took place in Abidjan.

"The UK has no doubt as to our sovereignty over the British Indian Ocean Territory, which has been under continuous British sovereignty since 1814," a spokesperson for the Foreign Office said.

Britain insists the archipelago belongs to London and has renewed a lease agreement with the United States to use Diego Garcia, the largest of the islands, until 2036.

Diego Garcia played a strategic role during the Cold War, and then as an airbase, including during the war in Afghanistan.

Since 1975, Mauritius has made a concerted legal effort to secure the archipelago's return to its fold.

Earlier this month, the government denied a report that it had allowed India to build a military base on the remote island of Agalega, after the news sparked fears of a repeat of the 1965 decision by Britain to separate the Chagos Islands from Mauritius.