US ships more than 2 mln more Covid vaccines to Africa 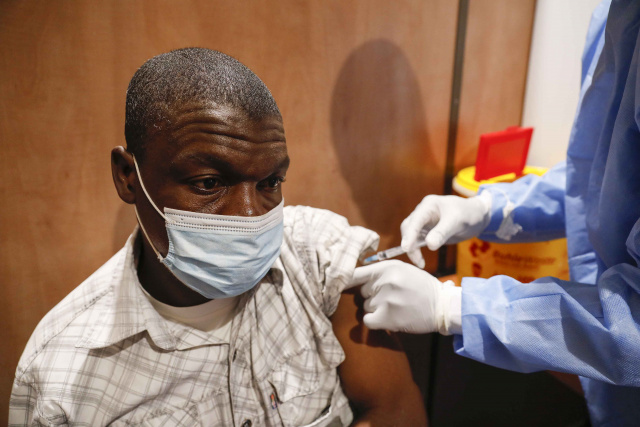 A man looks on as he receives a jab of the Johnson and Johnson vaccine from a healthcare worker inside the Transvaco Covid-19 vaccine train stationed at the Springs Train Station outside of Johannesburg, on August 25, 2021. Transvaco's role is purely to administer Covid-19 vaccines to communities which have limited healthcare resources. (Phill Magakoe / AFP)

(AFP) - The United States is shipping more than two million doses of Covid-19 vaccines to Algeria, Ghana and Yemen, the White House said Thursday, boosting efforts to combat a third wave of the pandemic across Africa.

The shipments, which a White House official told AFP would land before the end of this week, will be the first donated by the United States to all three countries. They come on the heels of recent deliveries to other countries on the continent, including Nigeria and hard-hit South Africa last month.

Taken from surplus in the US stockpile, 604,800 doses of Johnson & Johnson will go to Algeria, just over 1.2 million doses of Moderna to Ghana, and another 151,200 J&J doses to Yemen, said the official, who asked not to be identified.

All the shipments are being made through Covax, the distributor backed by the World Health Organization and the Gavi vaccine alliance.

President Joe Biden, who took office promising to focus on getting Americans vaccinated after suffering the world's highest toll from coronavirus, has since expanded his goal to make the United States the vaccine "arsenal" internationally.

The "administration understands that putting an end to this pandemic requires eliminating it around the world," the White House official said.

Biden has come under fire for authorizing Americans to get booster shots starting in September, but US officials say there is enough capacity, even while maintaining the flow of donations abroad.

The latest shipments will raise the total number of US shots delivered in Africa to more than 25 million, the official said.

Africa is in the grip of a third wave of infections and losing the race to mass vaccination.

Less than two percent of people across the continent are fully vaccinated, with some countries having to destroy unused shots because they lack the health infrastructure to administer them or have met strong vaccine hesitancy.

Ghana, with a population of around 32 million, was initially hailed as a model for coronavirus response, even using drones to deliver vaccines to remote areas. Ghana was also the first country to get vaccines through Covax in February.

However, less than three percent of the population is estimated to have been fully vaccinated. The Covid death toll of 982, reported to the World Health Organization, is believed to be underestimated due to lack of testing.

Algeria, which has close relations with Moscow and was an early recipient of Russia's Sputnik V vaccine, is also struggling to get shots in arms. According to WHO figures, there have been 5,063 Covid deaths in the country of 43 million people.

There is a lack of reliable pandemic data from Yemen, already on its knees from war and poverty. The devastated nation of 30 million relies on vaccine donations but also suffers from threadbare healthcare infrastructure.

The White House says about 130 million doses have so far been distributed from the United States to 90 countries.

In addition to dipping into its surplus supplies, the US government has purchased 500 million Pfizer-BioNTech doses specifically for distribution to the African Union and 92 selected low-income countries. The United States also donated $2 billion to Covax.