US warns of more terror attacks at Kabul airport 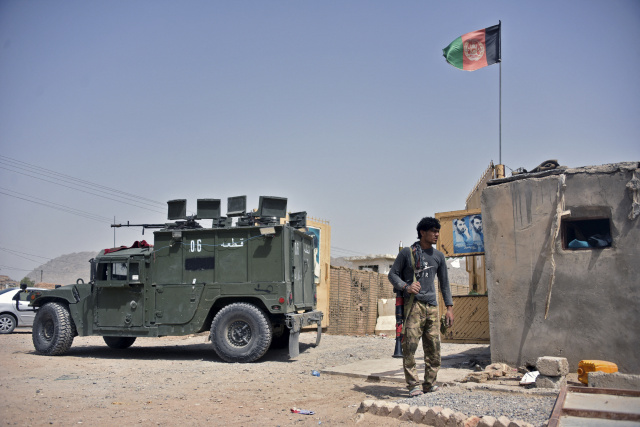 An Afghan security personnel stands guard at the site of a car bomb attack in Kandahar on July 6, 2021. (JAVED TANVEER / AFP)

(AFP) - Suicide bomb threats hung over the final phase of the US military's airlift operation from Kabul Sunday, with President Joe Biden warning another attack was highly likely before the evacuations end.

More than 112,000 people have fled Afghanistan via the massive US-led airlift since the Taliban movement swept back into power a fortnight ago, and the operation is winding down despite Western powers saying thousands may be left behind.

What had already been a chaotic and desperate evacuation turned bloody on Thursday when a suicide bomber from the local chapter of the Islamic State group targeted US troops stopping huge crowds of people from entering the airport.

More than 100 people died in the attack, including 13 US service personnel, slowing down the airlifts ahead of Biden's deadline for evacuations to end by Tuesday.

The Pentagon said Saturday retaliation drone strikes had killed two "high-level" IS jihadists in eastern Afghanistan, but Biden warned of more attacks from the group.

"The situation on the ground continues to be extremely dangerous, and the threat of terrorist attacks on the airport remains high," Biden said.

"Our commanders informed me that an attack is highly likely in the next 24-36 hours."

The US embassy in Kabul later released an alert warning of credible threats at specific areas of the airport, including access gates.

In recent years, the Islamic State's Afghanistan-Pakistan chapter has been responsible for some of the deadliest attacks in those countries.

They have massacred civilians at mosques, public squares, schools, and even hospitals.

While both IS and the Taliban are hardline Sunni Islamists, they are bitter foes -- with each claiming to be the true flag-bearers of jihad.

The IS attack has forced the US military and the Taliban into a form of cooperation to ensure security at the airport that was unthinkable a fortnight ago.

On Saturday Taliban fighters escorted a steady stream of Afghans from buses to the main passenger terminal, handing them over to US troops for evacuation.

The troops were seen throughout the civilian side of the airport grounds and annexe buildings, while US Marines peered at them from the passenger terminal roof.

After a 20-year war, the foes were within open sight of each other, separated by just 30 metres.

Also in view of the US troops were the Taliban's "Badri" special forces in American Humvees gifted to the now-vanquished Afghan army.

Taliban spokesman Bilal Karimi tweeted that the group's fighters had already moved into parts of the military side of the airport, but the Pentagon stressed that US forces retained control over the gates and airlift.

Pentagon spokesman John Kirby, however, said US troops had already started withdrawing -- without saying how many were left.

Western allies that helped with the airlift have mostly already ended their flights, with some voicing despair at not being able to evacuate everyone at risk.

The head of Britain's armed forces, General Sir Nick Carter, told the BBC it was "heartbreaking" that "we haven't been able to bring everybody out".

France and Britain will on Monday urge the United Nations to work for the creation of a "safe zone" in Kabul to protect humanitarian operations, he said.

"This is very important. This would provide a framework for the United Nations to act in an emergency," he said.

The United Nations said it was bracing for a "worst-case scenario" of up to half a million more refugees from Afghanistan by the end of 2021.

At the airport, gone are the crowds of thousands mobbing the perimeter, hoping to be let through and allowed onto a plane.

The Taliban have now sealed off roads leading to the facility and are only letting sanctioned buses pass.

An AFP photographer saw a journalist friend Saturday among those brought by bus for evacuation -- he had worked for the US-led coalition force's media department and was considered at risk of Taliban retribution.

They embraced briefly before parting ways.

"Good luck," they told each other -- one staying behind, and the other on his way to a new life.