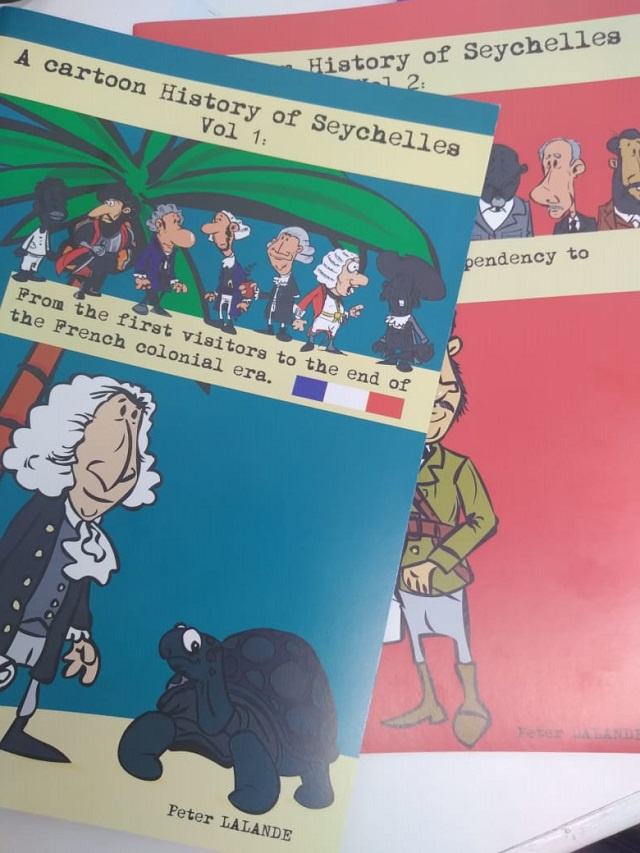 Lalande, whose illustrations of the history of the islands are in volumes, said that his work is geared towards the younger generation. (Peter Lalande)

(Seychelles News Agency) - A Seychellois cartoonist is recounting the island nation's history through a series of animated stories, from the arrival of the first settlers to the islands changing from a French to a British Colony through to independence in 1976.

Peter Lalande, a historian-turned-cartoonist, said that he always had a passion for comic books. French series such as 'Tintin', 'Asterix and Obelix' as well as 'Lucky Luc' are some of his favourites, he said.

"Even though you are doing an intellectual project, you can use the skills that you have to tell your story. I think that this is what has liberated me and in the context of Seychelles, we can use it to tell our history, tell who we are, tell other stories and folklore by using images and animations," explained Lalande.

Lalande, whose illustrations of the history of the islands are in volumes, said that his work is geared towards the younger generation who are more attracted to this form of art. "As I have a background in history, a few years back I realized that the population does not know enough of our history," said Lalande, adding that most of the island nation's history is featured in one or a series of texts in books with no illustrations.

He added that Seychelles has a very rich history, rich with different events and that most of these are retold by foreigners and not Seychellois.

"So one of the ways to entice our kids to know our history better, was through these and to put it at a level that they would understand, "said the cartoonist.

According to Lalande, his works are illustrations based on accurate historical facts in the 250 years of Seychelles – 115 islands in the western Indian Ocean. To date, the historian has completed two out of the three books.

The first book is all about the first settlement and first establishment. The second book covers the period up to 1903 when the islands became crown colony. Lalande explained that working on the project had many advantages including a collaboration with the Ministry for Education.

According to the historian his book series on the history of Seychelles, is by a Seychellois and for the Seychellois.

Arts & Culture » Be a reporter: Write and send your article » Subscribe for news alert
Tags: history of Seychelles