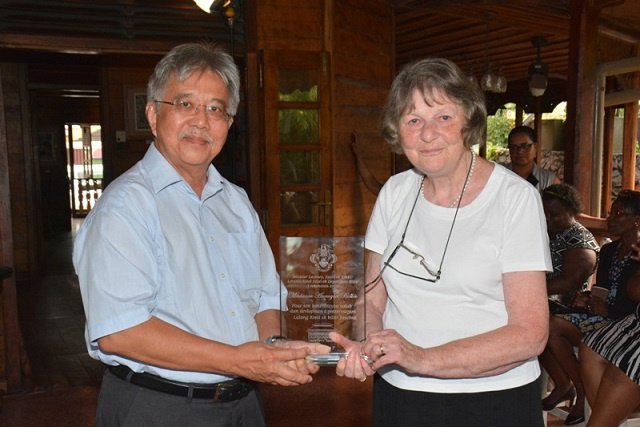 Bollée (right) received a trophy for her contribution in the development of the Creole language in 2017 by the then chairman of the board of the Creole Institute, Bernard Shamlaye. (Seychelles Nation)

(Seychelles News Agency) - A German national is being remembered in Seychelles as an ardent supporter and promoter of the development of the Creole language.

Annegret Bollée passed away last weekend in her native country at age 84. The professor – a linguist – is described as a pioneer in the research of the Seychellois Creole.

Anna, as she was affectionately known amongst her friends, first came to islands in 1973. She edited the very first Creole language dictionary in 1982.

The entries for this dictionary have formed the basis of the current lexical database maintained by the Creole Institute for all its language tool development projects, inclusive of an ongoing monolingual dictionary and a Creole spell-check.

The Creolist, as she called herself, also produced several folktales and stories from Seychelles – 115 islands in the western Indian Ocean.

She told SNA lastThursday that "the biggest achievement that Bollée made was to have initiated scientific researches on the language."

Choppy explained that she first met Anna in 1999, during one of the latter's annual visits to the island nation. This was at a time when Choppy was planning to organise a first colloquium on the Creole language. In October the colloquium materialised and Anna was amongst the participants.

She recounted: "One of my most cherished memories is her standing with me on the steps of the Creole Institute building, waving off the colloquium participants after the closing ceremony. She was waving her handkerchief, a little bit like a film star in an old movie, I thought."

Choppy added that once Bollée had committed to Seychelles as her field of study, she only had the best interests of the country and its people at heart. "In Seychelles, Anna worked with people and not on them, and she even did it remotely. In doing so, she has left a legacy."

According to Choppy "these works, along with many others which she has published with other researchers, are the cornerstones of reference for anybody working on Seychellois Creole, especially in the field of language and linguistics. Besides this, Anna has produced many other documents that trace the history of language development in Seychelles."

"Anna has not maintained a monopoly of Creole studies in Seychelles, but has rather engaged other researchers, most of them her past students, in different types of research projects," said Choppy.

In a joint press release last Thursday, the University of Seychelles and the Creole Institute of Seychelles said Bollée's passing "has left behind a great void in the Creole studies community, and a legacy of love, hope and conviction in the creole language as an emerging language that represents progress, diversity, resilience and human interaction."

Obituaries » Be a reporter: Write and send your article » Subscribe for news alert
Tags: Creole Institute