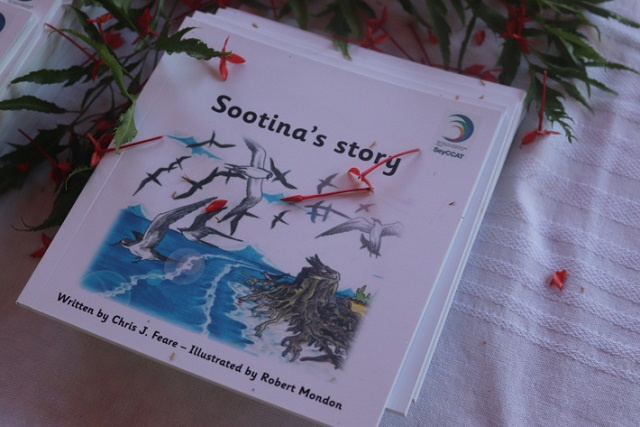 The book was illustrated by Robert Mondon. (Seychelles Nation)

(Seychelles News Agency) - Children will be able to learn more about the marine ecosystem and the threats to it through the journey of Sootina, a fictional female sooty tern character in a new book called "Sootina's Story."

Sootina takes children on her journey from hatching on Bird Island in a large colony, her development on the island, flying off for adventures across the Indian Ocean, then returning to Bird Island to breed at the age of five.

Launched on August 8, Sootina's Story was written by Chris Feare, a renowned scientist with over 40 years of conducting research of the birds in Seychelles. The book was illustrated by Robert Mondon. It is available in book stores on the island and can also be obtained from Robert Mondon at a cost of SCR100.

Feare told SNA that he has been studying sooty terns in Seychelles, an archipelago in the western Indian Ocean, since 1972 and has published a lot of scientific papers. However, he said, he realised two years ago that only a few specialists were reading these papers.

"I was not getting through to the general public. I wrote a book that was published in 2017 called 'Orange Omelettes and Dusky Wanderers,' which represents sooty terns. The people who really need to know this information are the people who are going to be running conservations in the years to come and that is the children. I thought that I'll have a go in writing a book for children," said Feare.

The book is an opportunity for children to learn about a sooty tern's dependence on tuna, climate change, overfishing, challenging weather conditions and the egg harvesting industry in a way that will engage them into being environmentally conscious and inspire them to take up careers in conservation.

The publication of the book was made possible under Seychelles Conservation and Climate Change Adaptation Trust's (SeyCCAT) Blue Grants Fund 4, a grant that amounted to SCR100,000.

The chief executive of SeyCCAT, Angelique Pouponneau, told SNA that the book translates one of the trust other projects into a children's book.

"It translates the scientific research that we funded about where juvenile sooty terns go into an accessible children's book. We are moving science to become more accessible. It also is a continued commitment to the education of our children and youth as a way to inspire them and to connect with nature and pursue careers within conservation and addressing climate change," said Pouponneau.

The book makes use of information that was gathered during SeyCCAT's project, Sooty Tern Satellite Tracking Project, led by Rachel Bristol, which tracks the feeding habitats of juvenile sooty terns to better understand the open ocean environments surrounding Seychelles.