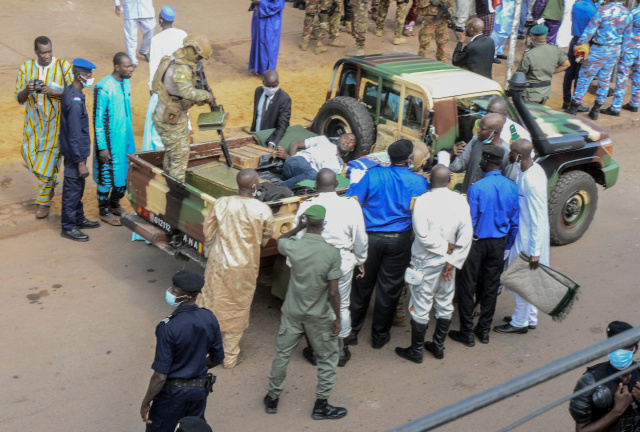 Security personnel watch an alleged attacker (C) as he lies in the back of a vehicle at The Grand Fayçal Mosque in Bamako on July 20, 2021, after two assailants attempted to stab Mali's interim transitional President Colonel Assimi Goita during Eid al-Adha prayers at the mosque in the Malian capital. Mali's interim president Colonel Assimi Goita was "safe and sound", his office said, after an assassination attempt by two men, one wielding a knife, during prayers at a mosque in Bamako. An AFP journalist who witnessed the attack said the assailants lunged at Goita, who was quickly whisked away by security. (EMMANUEL DAOU / AFP)

(AFP) - The colonels who rule Mali have repeatedly said they will restore civilian rule in early 2022, but with less than six months to go before promised elections, doubts about the timetable are deepening.

In May, the military, irked by a ministerial reshuffle, forced out the interim civilian president and replaced him with the junta's leader, Assimi Goita.

But Mali's leaders have persistently vowed to stick to an 18-month timetable for the civilian transfer of power -- a key demand set by neighbours deeply worried by the turbulence.

The official schedule calls for a constitutional referendum on October 31, followed by regional and local elections on December 26, leading to the first round of presidential and legislative elections on February 27.

But this calendar -- ambitious in any country -- seems even harder to achieve in a nation burdened with political and logistical problems.

Many are now questioning whether the declared deadline for the military to return to their barracks will be upheld.

So far, no draft proposal for constitutional change has been submitted to the National Transition Council, the legislative body set up during the transition period, although this was supposed to have happened in July.

And there has been no word about an overhaul of the electoral roll that should have been completed in July and vetted in August.

"Nothing much is happening except for the holding of big, long-winded meetings," was the pithy summary of an election expert in Bamako, the Malian capital.

"What's needed for the handover isn't time but the will to act," said Adam Dicko, a civil society campaigner, at a recent cafe debate.

Former prime minister Moussa Mara, at the same event, urged people to be "pragmatic" and to help the transitional authorities stage the elections.

"It is still possible (to vote on time) provided there is a decision to hold 'secondary' elections later. The (schedule for the) presidential election is possible," he insisted, adding: "It's time for the government to tell us what's going on."

But another major hurdle is looming on how the elections will be staged.

A gathering called the National Forum for Reform, or ANR, is set to unfold in the coming weeks.

Debate will focus on a plan unveiled in late July by Prime Minister Choguel Kokalla Maiga -- a veteran politician hand-picked by Goita -- to centralise Mali's multiple electoral bodies into a single centralised entity.

Most of the former French colony's political parties have attacked the idea as being rammed through and impractical, and many have called for it be scrapped.

There is, however, a broad consensus of support for publishing a "clear, precise and realistic" electoral timetable, in the words of Ibrahim Sangho, a prominent voice on the election issue.

As the clock ticks and unresolved problems pile up, diplomats fear that a postponement of the handover to civilian rule will become a fait accompli.

They point to a few demonstrations in Bamako and in Nioro du Sahel, in the northwest, that called for an "extension" of the transition period.

But none gathered much of a crowd -- an essential ingredient for the military, which seized power on the back of mass protests against Keita.

The army needs to "show strong popular support" for any extension "in the face of a united political class and an international community which is dead against" any deadline slippage, political researcher Boubacar Haidara said.

Haidara also noted that public anger at corruption was another potential wellspring of support for the military -- last week, former prime minister Soumeylou Boubeye Maiga was detained in a graft probe.