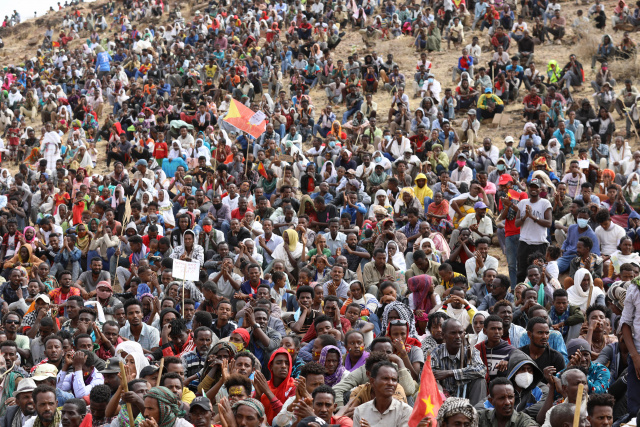 Ethiopian refugees gather to celebrate the 46th anniversary of the Tigray People's Liberation Front at Um Raquba refugee camp in Gedaref, eastern Sudan, on February 19, 2021. In remote eastern Sudan, refugee activists are keeping the flame burning for the former rebels who dominated Ethiopian politics before being ousted from their regional stronghold of Tigray last year. (Hussein Ery / AFP)

(AFP) - Ethiopian Airlines said Monday its transport of weapons to Sudan was a "legal and commercial" shipment of hunting guns, after reports the cargo was confiscated by the authorities in Khartoum.

Sudan's SUNA news agency reported that the weapons were seized at Khartoum airport on Saturday after being flown in on an Ethiopian Airlines passenger flight, prompting an investigation.

But on Monday, Sudan's interior ministry confirmed that the seized shipment which belonged to a licensed trader was "legitimate".

"There were no indications that it was illegal," the ministry said in a statement carried by SUNA.

The weapons had originally been sent from Russia to Ethiopia in May 2019 and were held by authorities there for two years, according to Sudanese officials.

SUNA had reported earlier that authorities had suspicions that the shipment was "meant to be used in anti-state crimes, to impede the democratic transition, and prevent transition to civilian rule."

Sudan has been undergoing a rocky transition since the April 2019 ouster of president Omar al-Bashir following mass protests against his rule.

But Ethiopian Airlines, the biggest carrier in Africa, said it had full documentation to prove the legality of the shipment including a letter from Sudan's foreign ministry.

"Ethiopian Airlines' shipment of weapons to Sudan is a legal and commercial transportation of hunting guns with all proper documents of the shipper and the consignee," it said in a statement.

It said the guns had been held by security authorities in Addis Ababa for a long time for verification, and that the recipient had sued the airline in a Sudanese court to either deliver them or pay almost $250,000 compensation.

Relations are frosty between Khartoum and Addis Ababa, with the two countries at odds over the Grand Ethiopian Renaissance Dam (GERD) on the Blue Nile and Ethiopian farmers' use of a fertile border region claimed by Sudan.

Last month Sudan recalled its ambassador to Ethiopia, saying Addis Ababa had spurned its efforts to broker a ceasefire in the Tigray conflict.

Tens of thousands of refugees from the 10-month war in the northernmost region of Ethiopia have been crossing the border into Sudan.

General » Be a reporter: Write and send your article » Subscribe for news alert
Tags: Sudan, Ethiopia