Parole for S.Africa's Zuma ahead of graft trial angers opposition 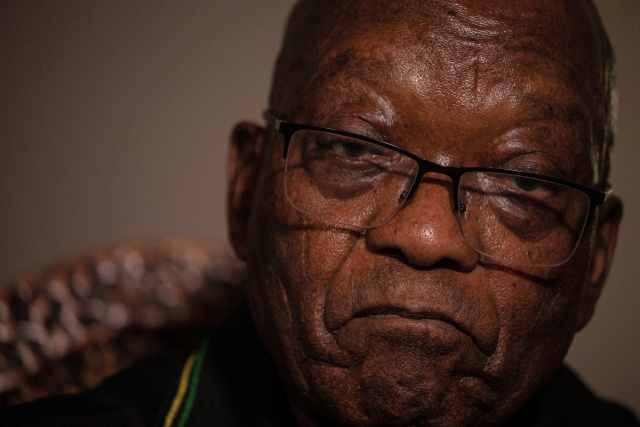 (AFP) - South African leader Cyril Ramaphosa on Monday hailed the placement of his jailed predecessor Jacob Zuma on medical parole as opposition and other groups suspected it was a political move and demanded answers.

Just 60 days into his 15-month jail term for defying an order to answer questions before graft investigators, prison authorities announced Sunday that the 79-year-old politician was placed on medical parole.

Zuma was hospitalised a month into his incarceration, at a facility outside the prison, under the care of military medics. He remains there and his illness remains a closely guarded secret.

The decision coincided with a meeting of the ruling African National Congress's National Executive Committee.

"We welcome this," Ramaphosa said in a televised briefing to mark the end of the meeting. "We would like to wish him a quick recovery as he is restored back to his home to be with his loved ones."

But the granting of parole has angered opposition and civil society groups, which suspect it was a politically inspired move and want answers.

"It's extremely suspicious," John Steenhuisen, leader of the largest opposition Democratic Alliance, told AFP. "This is a political decision, not a medical decision."

He and other opposition figures have vowed to force the prisons to publish details outlining the steps taken to reach the parole decision.

Mmusi Maimane, leader of pressure group One South Africa movement, said the action demonstrated that "if you are politically connected, the inside of the prison is not a place for you".

But a prisons official insisted the decision was above board and based on doctors' conclusions.

"Mr Zuma does require a great deal of medical attention" and met the criteria for medical parole, the official said, while declining to disclose Zuma's illness.

Lawson Naidoo, head of a civic group, the Council for the Advancement of the South African Constitution, said "the timing of the announcement, apart from coming on a Sunday afternoon, does raise questions because... Mr. Zuma would have been eligible for parole in a few weeks' time, having served the minimum requirement for a 15-month jail sentence."

The news came just three days before the resumption Thursday of Zuma's long-running corruption trial over an arms deal dating back more than two decades.

Last month, the trial was postponed to September 9, pending a medical report on his fitness to stand trial.

"Given Mr Zuma's elongated Stalingrad strategy in terms of avoiding having to answer charges of fraud and corruption related to the arms deal, it would come as no surprise to anyone if this medical parole is now going to be used... as a pretext to say he is not fit to stand trial," he said.

A foundation representing the last apartheid leader F. W. de Klerk, said the circumstances under which Zuma got the parole were "deeply suspect" alleging they were unprocedural.

In a statement, it said "the abuse of political influence to undermine criminal justice processes negates" constitutional values and "sets a dangerous precedent".

Another opposition group, ActionSA, complained that the parole pointed to a justice system that "treats the most powerful amongst us with kid gloves and allows them to evade justice and accountability".

General » Be a reporter: Write and send your article » Subscribe for news alert
Tags: SAfrica, Zuma