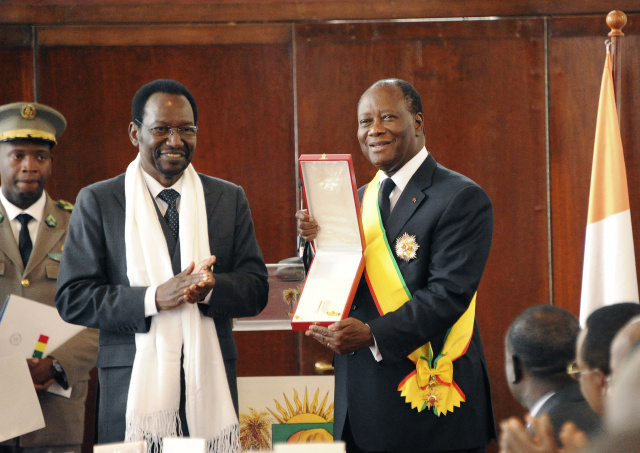 Ivory Coast President Alassane Ouattara (R), who is also the new ECOWAS organisation chairman, receives a medal of honor named the Malian "Grand-croix de l'ordre national" from Mali's interim president Dioncounda Traore (2nd L), after a meeting at the presidential palace in Abidjan, on September 3, 2013. Traore thanked Alassane Ouattara for his support during the Malian crisis, in a meeting in Abidjan which marked his last foreign diplomatic trip as Malian interim president. Traore is preparing to hand over power to the new Mali President elect Ibrahim Boubacar Keita on September 4, 2013. (AFP PHOTO / SIA KAMBOU)

In a statement, the group said it remained "worried by the lack of concrete action" to prepare for the vote, which has been promised for February 2022 by strongman Colonel Assimi Goita.

The announcement came at the end of a three-day mission to Mali led by former Nigerian president Goodluck Jonathan.

The 15-nation Economic Community of West African States (ECOWAS) has repeatedly voiced fears about the situation in Mali, one of the region's poorest and most volatile states.

"The mission recalled the importance of respecting the date of the announced elections in order to demonstrate the credibility of the transition process," said the ECOWAS statement, which was read out to journalists in Bamako.

The military then appointed an interim civilian government tasked with steering back to democratic rule.

But Goita deposed the civilian leaders of this interim government in May -- in a second coup -- and was later declared president himself.

He has pledged to respect the February deadline for civilian elections set by the interim government, which also set October 31 as a date for holding a constitutional referendum.

Rampant insecurity in Mali, and the scale of the task, has cast doubt on the reform timetable, however.

Swathes of the vast country lie outside of government control because of a jihadist insurgency that first emerged in the north in 2012, before spreading to the centre of the country, as well as neighbouring Burkina Faso and Niger.

Last week, a police special-forces commander who had been detained as part of an investigation into the killings of protesters in 2020, was released after armed police officers turned up at the prison where he was being held.