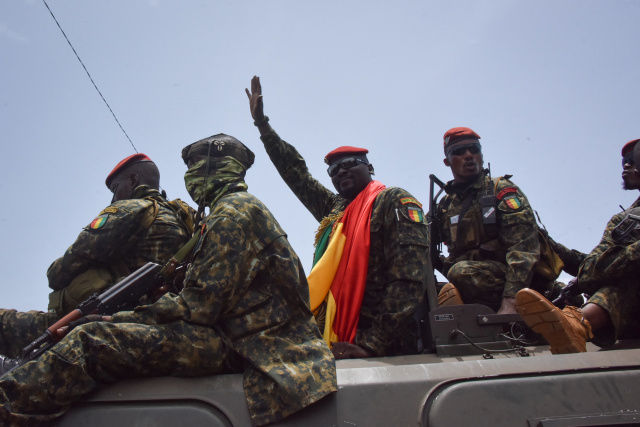 Lieutenant Colonel Mamady Doumbouya (C), head of the Army’s special forces and coup leader, waves to the crowd as he arrives at the Palace of the People in Conakry on September 6, 2021, ahead of a meeting with the Ministers of the Ex-President of Guinea, Alpha Conde. Lieutenant Colonel Mamady Doumbouya, the leader of the latest coup in Guinea, is a highly educated, combat-hardened soldier who once served in France's Foreign Legion.
Doumbouya's special forces on September 5, 2021 seized Alpha Conde, the West African state's 83-year-old president, a former champion of democracy accused of taking the path of authoritarianism. (CELLOU BINANI / AFP)

(AFP) - West African foreign ministers will arrive in Guinea on Friday to evaluate the situation after a military coup in the country, Burkina Faso's foreign minister Alpha Barry said Thursday.

The foreign ministers of Burkina Faso, Ghana, Nigeria and Togo will visit as representatives of the West Africa bloc ECOWAS, said Barry, a member of the delegation.

Conde, 83, had come under increasing fire for perceived authoritarianism, with dozens of opposition activists arrested after a violently disputed election last year.

But the putsch in Guinea has sparked fears of democratic backsliding across West Africa -- where military strongmen are an increasingly familiar sight.

It has drawn parallels with its neighbour Mali. The Sahel state has suffered two coups since August last year led by Colonel Assimi Goita, who was also a special forces commander.

On Wednesday Barry had announced the 15-nation ECOWAS would send a "high-level mission" to Guinea to review the situation.

So far the West African bloc has imposed no economic sanctions on Guinea.

When faced with a similar predicament in Mali last year, ECOWAS imposed economic sanctions on the country, but lifted them after Mali's ruling military committed to restoring civilian rule.

Doumbouya, hours after taking power in Conakry, appeared on television and accused the Conde government of "endemic corruption" and of "trampling on citizens' rights".

He has pledged to open talks on forming a new government, but it is not yet clear when, or under what form, these may take place.

The coup leader has also sought to reassure the business community, alarmed over the potential for disruptions in commodity supply chains.

Mining is the economic backbone of Guinea, which has abundant mineral resources, from bauxite and iron ore to gold and diamonds

Guinea will continue to uphold "all its undertakings and mining agreements", the coup leader said Monday

The military coup was met with jubilation in some parts of Conakry, where residents turned out on the streets to applaud passing soldiers.