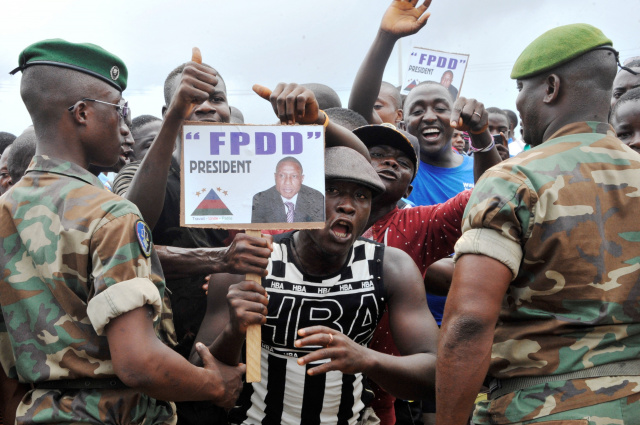 Supporters of Guinea's exiled former junta chief Moussa Dadis Camara demonstrate in front of soldiers, on August 26, 2015 at the airport in Conakry. A plane carrying Guinea's exiled former junta chief Moussa Dadis Camara back home to Conakry, where he hopes to run for president in October, was diverted to Ghana on August 26, according to his political party. The situation angered scores of the former coup leader's supporters waiting for him in Conakry, who blocked access to the airport's parking and threw stones at police who fired tear gas to disperse them, according to an AFP reporter at the scene. (AFP PHOTO / CELLOU BINANI)

"The junta does not deserve to be sanctioned because it put an end to a situation of lawlessness," former prime minister Cellou Dalein Diallo told AFP.

Diallo, who ran unsuccessfully against the deposed leader Alpha Conde three times in successive presidential elections, told AFP there were no other options left but a coup.

ECOWAS has suspended a decision on economic sanctions until it gets a report from a fact-finding mission sent to Guinea.

But Diallo said: "The involvement of the army to end an illegal and illegitimate mandate was for me a welcome decision."

He maintains that Conde cheated him out of the presidency in the 2020 election.

But the putsch in Guinea has sparked fears of democratic backsliding across West Africa -- where military strongmen are an increasingly familiar sight.

It has drawn parallels with its neighbour Mali: the Sahel state has suffered two coups since August last year led by Colonel Assimi Goita, who was also a special forces commander.

But defending the Guinea coup, Diallo argued: "Practically speaking, there was no longer any other recourse.

"If (the junta) is really committed to moving towards constitutional order by organising free and transparent elections in a reasonable time I don't think it's necessary to sanction them," he said.

Guinea's putschists have formed a junta named the CNRD, which has dissolved the government -- and the controversial new constitution that Conde pushed through to allow to run for a third term.

But they have also promised form a "government of national union" to oversee a political transition.

In Mali, ECOWAS initially objected to the military regime there overseeing a move to transitional rule after the army seized power there. But they remain in power, and doubts are growing about their commitment to February 2022 elections.

In Chad, when Idriss Deby Itno died in battle in April, his son seized power at the head of a military junta.

Neither ECOWAS nor the African Union had been able to impose an immediate move to civilian rule.

In those circumstances, said Diallo, neither organisation is well placed to impose terms on the Guinea regime.

"It's very difficult to want to impose on Colonel Doumbouya a civilian president -- but it would be desirable that the prime minister was a civilian," he added.

Africa » Be a reporter: Write and send your article » Subscribe for news alert
Tags: Guinea, politics