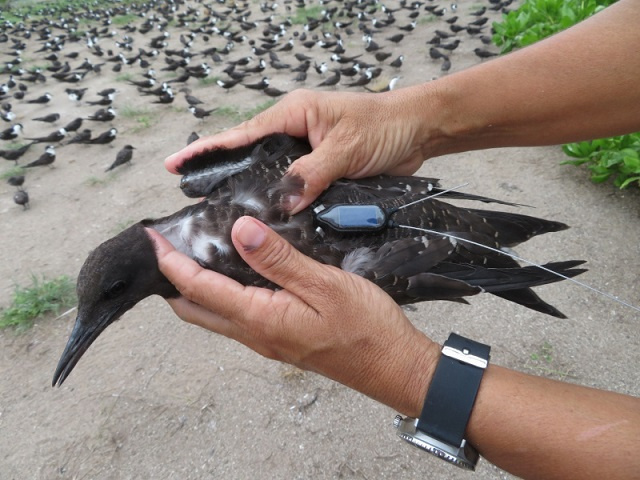 The tagging was undertaken in August 2019, with data from the tags continuing to provide location data from the juveniles up to August 2020. (Seychelles Climate Change Adaptation Trust)

The project is being described as significant to the development of Seychelles' blue economy and marine spatial plan as it identified areas that juvenile Sooty Terns have been flying to, possibly linked to the areas of high food availability.

The findings of this innovative project - the first of its kind in the 115 islands archipelago in the western Indian Ocean- were presented recently by the project coordinators.

The study was aimed at identifying the oceanic areas to which parents took their youngsters after leaving the colony since it was expected that these would be places of predictably high food abundance.

Rachel Bristol and Chris Feare gave presentations that showed the flight patterns of 14 satellite-tagged juvenile Sooty Terns from their leaving the Bird Island breeding colony in September 2019 to when the tags stopped transmitting, up to 12 months later.

In Seychelles, Sooty Tern eggs are a renowned delicacy and 'Bird Egg Season' is a highly anticipated event, but project funded by SeyCCAT (Seychelles Climate Change Adaptation Trust) has allowed for the Sooty Tern nesting season to be used as a means of assisting in the selection of areas for marine protection.

According to the researchers, if this expectation is correct, these selected locations could be of importance to other marine predators as well, including fish and cetaceans, and thus areas worthy of consideration for marine protection.

Professor Feare explained that "SeyCCAT grants allow scientists to study what has never been studied before and we are grateful that our SeyCCAT grant allowed us to undertake innovative research that would otherwise have been extremely difficult. The information we obtained is of international importance, not just for Seychelles, and we shall ensure our data are widely available so that everyone can benefit from our findings."

Due to the small sample size of only 14 tagged individuals, the pilot study did not give an obvious answer as to why Sooty Terns selected their chosen destinations but provided data on their dispersal after fledging.

Following the initial move to the north of Bird Island, all of the birds eventually dispersed more widely, with individuals reaching the Arabian Sea, the Mozambique Channel, the 90-east Ridge and the huge Chagos Marine Protected Area; all of these areas had been earlier shown to be of importance to Bird Island's adult Sooty Terns out of the breeding season.

The director general for biodiversity conservation and management division in the Ministry of Environment, Marie-May Muzungaile, said: "The potential of the findings to direct policy and assist in Seychelles' decision-making regarding marine conservation."