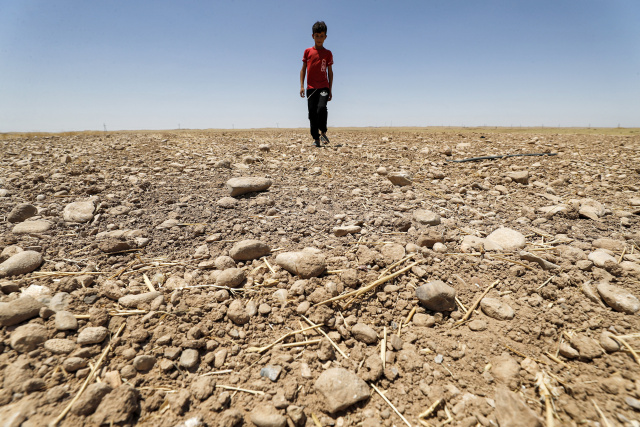 (FILES) In this file photo a boy walks through a dried up agricultural field in the Saadiya area, north of Diyala in eastern Iraq on June 24, 2021. Reduced agricultural production, water scarcity, rising sea levels and other adverse effects of climate change could cause up to 216 million people to leave their homes and migrate within their own countries by 2050, the World Bank has warned. The estimate from the Washington-based development lender released on September 13, 2021 updates a 2018 report with new figures from Eastern Europe and Central Asia, North Africa and East Asia and the Pacific to provide a more complete overview of the potential toll from rising global temperatures. (AHMAD AL-RUBAYE / AFP)

(AFP) - The UN's rights chief warned on Monday that environmental threats were worsening conflicts worldwide and would soon constitute the biggest challenge to human rights.

Michelle Bachelet said climate change, pollution and nature loss were already having a severe impact but that countries were consistently failing to take action to curb the damage.

"The interlinked crises of pollution, climate change and biodiversity act as threat multipliers, amplifying conflicts, tensions and structural inequalities, and forcing people into increasingly vulnerable situations," Bachelet told the opening of the 48th session of the UN Human Rights Council in Geneva.

"As these environmental threats intensify, they will constitute the single greatest challenge to human rights of our era."

The former Chilean president said the threats were already "directly and severely impacting a broad range of rights, including the rights to adequate food, water, education, housing, health, development, and even life itself".

She said environmental damage usually hurt the poorest people and nations the most, as they often have the least capacity to respond.

Bachelet said tackling the crisis was "doable", suggesting that spending to revive economies after the Covid pandemic could be focused on environmentally friendly projects.

But she said countries had not taken this approach consistently -- and were even failing to fund and implement commitments made under the Paris climate accords.

"We must set the bar higher -- indeed, our common future depends on it," the UN rights chief said.

Bachelet said that at the 12-day COP26 climate talks in Glasgow, set to begin on October 31, her office would push for more ambitious, rights-based commitments.

In her opening global update, Bachelet touched on the human rights situations in several countries, including Chad, the Central African Republic, Haiti, India, Mali and Tunisia.

On China, she said no progress had been made in her years-long efforts to seek "meaningful access" to Xinjiang but that her office planned to assess the claims about violations.

Rights groups believe at least one million Uyghurs and other mostly Muslim minorities have been incarcerated in camps in the northwestern region, where China is also accused of forcibly sterilising women and imposing forced labour. Beijing has strongly denied the allegations.

In the West Bank, Bachelet said she deplored "continued and increasing instances of excessive or entirely unwarranted use of force" against Palestinian civilians by Israeli security forces.

She said 54 Palestinians, including 12 children, had been killed so far this year -- more than double the figure for 2020 -- with more than 1,000 people injured by live ammunition.

"I am also deeply concerned by crackdowns on dissent by the government of the State of Palestine in recent months," she added.

General » Be a reporter: Write and send your article » Subscribe for news alert
Tags: UN, rights