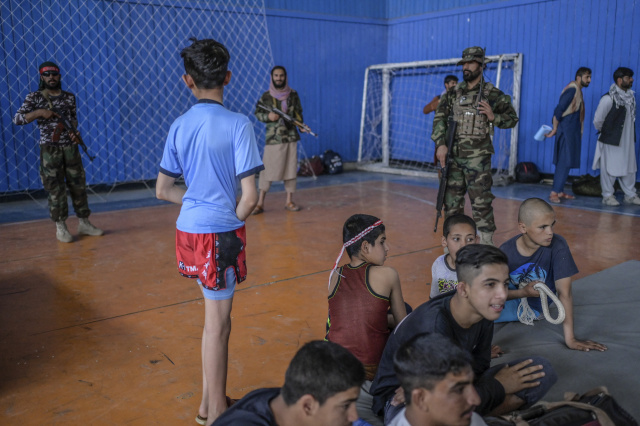 Youths wait to show their skills during an event organised for the visit of Taliban's director of physical education and sports Bashir Ahmad Rustamzai (not pictured) at a gymnasium in Kabul on September 14, 2021. From swimming to soccer, running to horse-riding, Afghanistan's new sports chief said on September 14 that the Taliban will allow 400 sports -- but declined to confirm if women can play a single one. (BULENT KILIC / AFP)

(AFP) - From swimming to soccer, running to horse riding, Afghanistan's new sports chief said Tuesday that the Taliban will allow 400 sports -- but declined to confirm if women can play a single one.

Rustamzai, a heavily-built former kung fu and wrestling champion with a bushy black and white beard, was appointed by the hardline Islamist group to be Afghanistan's director general for sports and physical education.

Once the wrestling federation chief when the Taliban were last in power, Rustamzai then worked with the Western-backed government, before falling out with them because of "their widespread corruption," he said.

Dressed in a black turban typical of the Taliban, Rustamzai repeatedly ducked questions on the issue of women's sports.

During the extremists' brutal and oppressive regime from 1996 to 2001, women were completely banned from playing any sport while men's sport was tightly controlled. Women were also largely banned from education and work.

"We will not ban any sport, unless it does not comply with sharia law... there are 400 type of sports allowed," Rustamzai said.

Shortly after, he watched a demonstration by young Afghan men, some zooming around on roller blades, and waving the white Taliban flag.

Rustamzai said that abiding by Islamic law meant little change in practice compared to other countries.

"It doesn't change much," he said, noting it would require, for example, football players or Muay Thai boxers to wear "shorts a little longer, which fall below the knee".

Pushed on women's participation, he said he was still awaiting decrees from the top Taliban leadership.

"We can imagine the same thing as in universities: allowing women to play sports, but separately from men," one of his advisors said.

But Rustamzai would not confirm that directly.

New rules on universities allow for women to continue studying as long as they are strictly segregated from men, and adhere to a dress code of an abaya robe and niqab face veil. The curriculum will also be controlled.

For now, the indications look bleak for women.

Last week, the deputy head of the Taliban's cultural commission, Ahmadullah Wasiq, said that it was "not necessary" for women to play sport.

"In cricket, they might face a situation where their face and body will not be covered," Wasiq told Australian broadcaster SBS. "Islam does not allow women to be seen like this."

But the Taliban are already under pressure, especially for cricket, where international regulations state that nations must also have an active women's team to take part in Test matches.

"Very soon, we will give you good news on how we will proceed," he said.

But Rustamzai distanced himself from the future of women's sport.

"The opinions of our elders (senior Taliban) are important," he said. "If they ask us to authorise women, we will -- otherwise, we will not. We await their announcement."