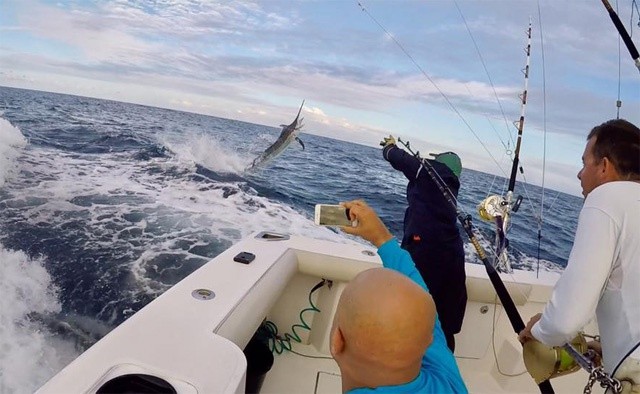 During this weekend's tournament, there will be other prizes on offer, such as the heaviest barracuda, wahoo, dorado, barrel of tuna and billfish release. (Faizal Suleman)

(Seychelles News Agency) - The Seychelles Sports Fishing Club this Saturday will host a new tournament for its members called the Yellowfin Tuna Cup.

The tournament starts at 5 am and ends at 5 pm. Prizes will be awarded immediately after weigh-in results are calculated. The winner of the competition will be the team that catches the heaviest yellowfin tuna.

The chairman of the Seychelles Sports Fishing Club (SSFC), Tarak Patel, told SNA that "we have changed the way we usually have our weigh-ins, where will limit the number of people present and rather host a prize-giving ceremony at a later date, everything will be done on the same day."

Patel said the decision was taken "to protect ourselves from the COVID-19 pandemic."

During this weekend's tournament, there will be other prizes on offer, such as the heaviest barracuda, wahoo, dorado, barrel of tuna and billfish release.

Sports Fishing has been one of the least affected activities during the COVID-19 pandemic, and the club has managed to host various tournaments throughout the year, although they had some hiccups.

"At the start of the year, we had to cancel two of our tournaments as the country had very strict restrictions, but when they were eased, we were able to resume and up till now it has been going quite well," said Patel.

He added that boat crews have not been asked to implement any special measures on their boat but they have to ensure their crew is protected to ensure a good tournament.

The last tournament hosted by the SSFC was the South-east Monsoon Sailfish Tournament, held in late July, where Team A1 were the winners, among six other teams.

"We have seen that many of our usual teams have not been deterred by the pandemic, although some have dropped out of some tournament," said Patel, before adding the SSFC is looking to encourage new teams to join the upcoming tournaments.

The club has already launched the La Digue Offshore Fishing Tournament, which will take place on November 6, where like last year, all teams will leave from Mahe, rather than the inner island of La Digue for safety reasons.

The SSFC was founded in April of 2009 and is a non-Profit association committed to promoting sport fishing in Seychelles, aiming to balance conservation and education with traditional angling practices.

Their final tournament for 2021 is scheduled for December.