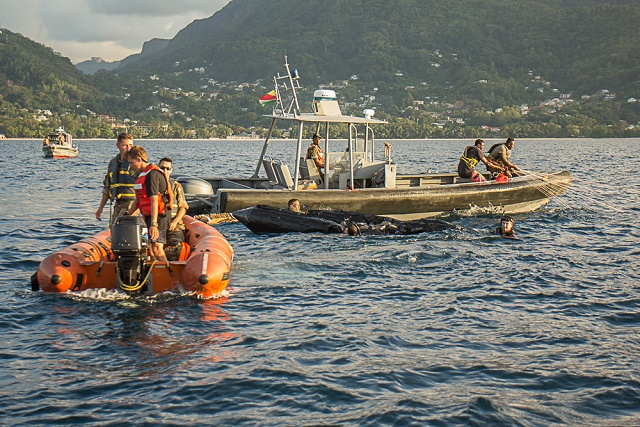 Part of the exercise that was done in November 2018 at Bel Ombre, Beau Vallon and Perseverance. (Salifa Karapetyan, Seychelles News Agency)

(Seychelles News Agency) - Seychelles and France will carry out a military exercise called 'Cateau Noir' from September 20-23, said a training officer of the Seychelles People's Defence Forces (SPDF) on Friday.

'Cateau Noir' is named after the Seychelles black parrot, an endemic bird found only on Praslin, the second-largest island of Seychelles, an archipelago in the western Indian Ocean.

Mathieu said that the exercise is divided into the training phase and the execution phase. The training phase, which involves the participation of the French Special Forces and the Seychelles Special Force Unit, has already started with 10 French officers who arrived in the country on September 13.

The military exercise which is held every two years between the SPDF and French armed forces in the south Indian Ocean will focus on the fight against the trafficking of illicit drugs.

"For this year, the exercise will be based on the fight against trafficking in narcotics, which is something very common everywhere and will help in tackling this issue on land and sea. The scenario for this year is based on Mahe being used as a logistic base for vessels transporting illicit drugs to other places," said Mathieu.

He added that "the exercise will begin with a visit, board, search and seizure and live firing exercise, and will end with a make-believe raid on land on Thursday."

The Air Force Dornier aircraft and the French aircraft will be used for intelligence, surveillance and reconnaissance in the exercise.

Mathieu said that the objectives of the exercise are for both forces to understand each other's operations, build up the joint operations between the two forces, to better help with patrols and interceptions in the region.

Earlier in the year Seychellois forces participated in the annual Exercise Cutlass Express 2021, sponsored by US Africa Command and conducted by US Naval Forces Africa. Thirteen nations took part.

Mathieu said that the SPDF hopes to hold its "own military exercise, where we will take the things that we have learned from all our multi-national cooperative exercises and put it together, to better equip ourselves."