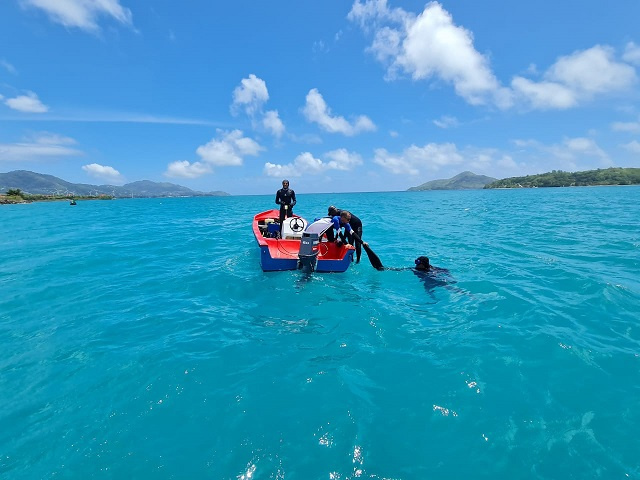 A team of four divers removed debris in the Providence area situated in the Ste Anne Marine park about 5km from the main island of Mahe. (Seychelles National Parks Authority)

(Seychelles News Agency) - Seychelles kicked off the Clean Up the World campaign on Friday with a dive-clean held in the Ste Anne marine park.

A team of four divers removed debris in the Providence area situated in the Ste Anne Marine park about 5km from the main island of Mahe.

The Marine National Park, a favourite snorkelling spot, comprises six islands: Ste Anne, Moyenne, Round, Longue, Cachee and Cerf. It was the first such park to be established in the Indian Ocean in March 1973.

This is the second dive clean up organised by the Seychelles National Parks Authority (SNPA) to mark the Clean Up the World Campaign. The first was held last year with the help of the Whitetip Divers dive centre.

The Minister for Environment, Flavien Joubert, told reporters after the dive that "we want to adopt a new approach with the campaign of not only cleaning the communities but also clean our sea as the sea also requires attention."

Joubert added that "the impression we get is that there are many fishing activities that take place in that area, leaving behind a lot of debris associated with it."

Among the waste the group was able to collect were some old ropes, fishnets as well as an old anchor.

The crew said that closer to the shore, they found many empty PET bottles and other litter associated with people visiting the area.

"This shows that we have not yet changed our behaviour. We are not yet conscious that we cannot litter a place, but we should instead take our rubbish and take them with us and not throw them in the sea," said Joubert.

One of the divers on the clean-up expedition, Dominic Thelermont, said "as long as we have the resources we plan to continue with the work we have started".

In addition to the dive clean-up, other activities have been planned for this weekend to mark the annual global event, and the added incentive of letting people dump their household and community waste at the Providence landfill for free from 8 am to 4 pm on Saturday.

"We feel encouraged that despite the current situation, people are actually taking part in the cleaning exercises being held in the various districts as well as some other selected spots," said Joubert.

General » Be a reporter: Write and send your article » Subscribe for news alert
Tags: Clean Up the World campaign, Seychelles National Parks Authority