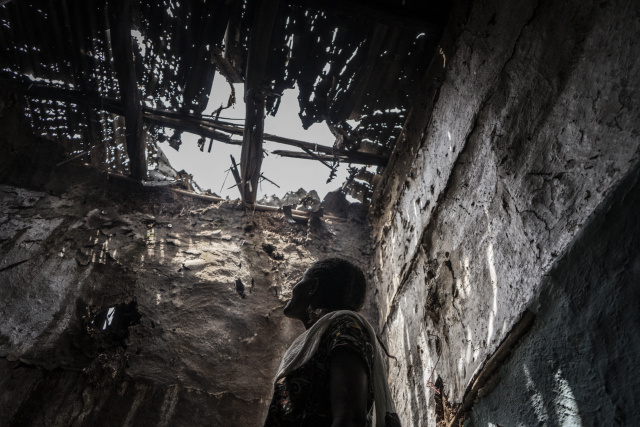 Abeba Tseganeh, 27, shows her house, which was allegedly attacked by pro-TPLF (Tigray People Libration Front) rebels, in the village of Zarima, 140 kilometers from Gondar, Ethiopia, on September 16, 2021. (Amanuel Sileshi / AFP)

(AFP) - US President Joe Biden on Friday signed an executive order allowing for sanctions against the warring parties in northern Ethiopia if they fail to commit to a negotiated settlement.

In a statement, Biden called the 10-month-old war in the Tigray region a tragedy and said: "I am appalled by the reports of mass murder, rape, and other sexual violence to terrorize civilian populations."

The executive order establishes a "sanctions regime to increase pressure on the parties fuelling this conflict to sit down at the negotiating table and, in the case of Eritrea, withdraw forces," a senior administration official said.

The United States is not imposing sanctions now but is giving itself the authority to do so if necessary, the official said.

The order gives the Treasury Department "the necessary authority" to sanction the governments of Ethiopia and Eritrea and the Tigray People's Liberation Front (TPLF), among other parties, the statement said.

Unless these parties take "concrete steps" to resolve the crisis the United States is prepared to impose sanctions against a wide range of individuals and entities in coming weeks, the administration official said without specifying who or what organizations might be targeted.

Ethiopian Prime Minister Abiy Ahmed sent troops into Tigray last November to topple the TPLF, which at the time was the ruling party in Tigray.

The conflict has killed thousands and left hundreds of thousands of others living in conditions bordering on famine, the United Nations says.

Eritrea has provided military support to Ethiopia by sending troops to Tigray, which lies along Eritrea's southern border.

Though Abiy promised a quick victory, fighting dragged on in Tigray until June when, in a stunning turnabout, the TPLF retook much of the region including its capital Mekele.

The TPLF then launched incursions into neighbouring Afar and Amhara regions, where subsequent fighting has displaced hundreds of thousands and killed an untold number of civilians.

Abiy has long accused Western powers including the US of overlooking crimes committed by the TPLF, which lawmakers officially designated a terrorist group in May.

He reiterated that point Friday in a three-page open letter to Biden responding to the executive order.

"Unfortunately, while the entire world has turned its eyes onto Ethiopia and the Government for all the wrong reasons, it has failed to openly and sternly reprimand the terrorist group in the same manner it has been chastising my Government," he wrote.

Later he added: "This unwarranted pressure, characterized by double standards, has been rooted in an orchestrated distortion of events and facts on the ground as it pertains to Ethiopia's rule of law operations in the Tigray region."

The back-and-forth between Washington and Addis Ababa came as the UN sounded the alarm about hundreds of aid trucks it said had "not returned" from Tigray, hampering the humanitarian response.

The Ethiopian authorities and Tigrayan rebels have blamed each other for obstructing humanitarian convoys trying to reach Tigray.

A government Twitter account on Thursday referred to "suspicions that TPLF (is) seizing trucks for own logistics".

But TPLF spokesman Getachew Reda cited obstacles drivers faced while entering Tigray from neighbouring Afar region, adding they have "nothing to do" with Tigrayan officials.

General » Be a reporter: Write and send your article » Subscribe for news alert
Tags: Ethiopia, Tigray, US