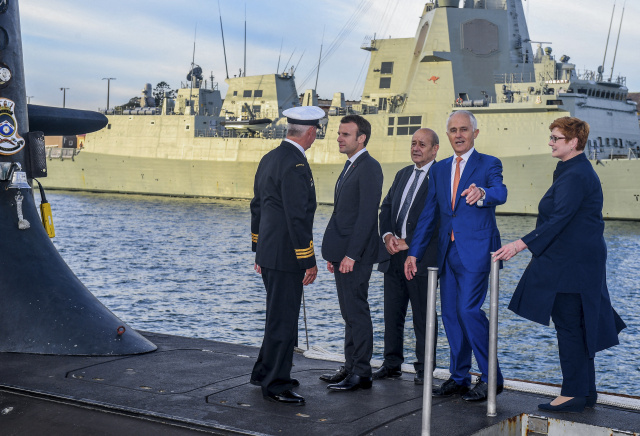 (FILES) A file photo taken on May 2, 2018 shows French President Emmanuel Macron (2/L) and Australian Prime Minister Malcolm Turnbull (2/R) standing on the deck of HMAS Waller, a Collins-class submarine operated by the Royal Australian Navy, at Garden Island in Sydney. Australia is expected to scrapped a 66 billion USD deal for France to build submarines, replacing it with nuclear-powered subs using US and British technology. (BRENDAN ESPOSITO / POOL / AFP)

(AFP) - Britain's Foreign Secretary on Sunday defended the country's new security relationship with Australia and the United States as showing "readiness to be hard-headed in defending our interests," despite more furious reaction from France.

As part of the alliance, Australia tore up a deal for French submarines in favour of American nuclear-powered vessels, sparking outrage in Paris which recalled France's ambassadors to Canberra and Washington in an unprecedented move.

Liz Truss wrote in the Sunday Telegraph that the pact, announced this week, "shows our commitment to security and stability in the Indo-Pacific region" and demonstrated the government's ambition to build a "Global Britain" following its departure form the European Union.

"Our new security pact will not just make us safer at home, it could also create hundreds of new and high-skilled jobs," she wrote.

"By positioning the UK at the heart of a network of economic, diplomatic and security partnerships... we are making our country safer and more competitive, standing up for our values."

Truss, who was promoted to the role on Wednesday, said the move highlighted Prime Minister Boris Johnson's "vision for Global Britain".

But her French counterpart on Saturday said Britain was a "third wheel" in the deal as he accused Sydney and Washington of lying over the ruptured Australian contract to buy French submarines, warning a grave crisis was underway between the allies.

Speaking to France 2 television, Foreign Minister Jean-Yves Le Drian gave no indication Paris was prepared to let the crisis die down, using distinctly undiplomatic language towards Australia, the US and Britain.

"There has been lying, duplicity, a major breach of trust and contempt," Le Drian said. "This will not do."

Le Drian also issued a stinging response to a question over why France had not recalled its ambassador to Britain.

Of London's role in the pact under Johnson, he added with derision: "Britain in this whole thing is a bit like the third wheel."

US President Joe Biden announced the new Australia-US-Britain defence alliance on Wednesday, in a pact widely seen as aimed at countering the rise of China.

General » Be a reporter: Write and send your article » Subscribe for news alert
Tags: Australia, US, Britain, France