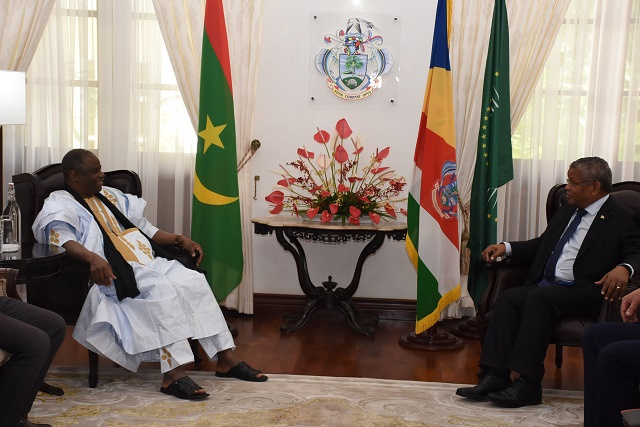 The new ambassador said discussions with the President focused on the existing relationship between the two countries. (Seychelles Nation)

(Seychelles News Agency) - Seychelles and Mauritania will work together in the fisheries industry as both countries have major interests in the sector, said the newly accredited ambassador.

The new ambassador of Mauritania to Seychelles, Jarr Ould Inalla, presented his credentials to President Wavel Ramkalawan on Tuesday morning.

Inalla expressed "immense pleasure at being able to serve my country in such a beautiful location. We will continue building on bilateral agreements for the mutual benefit of our two countries."

The new ambassador said discussions with the President focused on the existing relationship between the two countries, and as both have major interests in the fisheries sectors, this is an area that will be explored so that they can work together.

Currently, Seychelles' Port Victoria is a major player in the global tuna industry while fisheries exports from Mauritania on the other hand are now estimated at over $1 billion per year.

"I would like to remind you that the Seychelles and Mauritania are the only two countries to have handed in their reports to Fisheries Transparency Initiative (FiTI)," said Inalla.

FiTI is a global partnership aimed at increasing transparency and participation in fisheries. Those involved also aim to support the sector's long-term contribution to respective national economies all the while keeping a healthy marine environment.

Although the two countries are far apart, Mauritania and Seychelles share a common understanding of the critical importance of transparency in marine fisheries. Both countries submitted their reports to FiTi in April.

Mauritania has also expressed the will to also work with Seychelles in the domain of fighting terrorism and its financing as well as other challenges faced globally.

Inalla will be based in South Africa

Swedish tourists will return to Seychelles as soon as they are vaccinated, new ambassador says