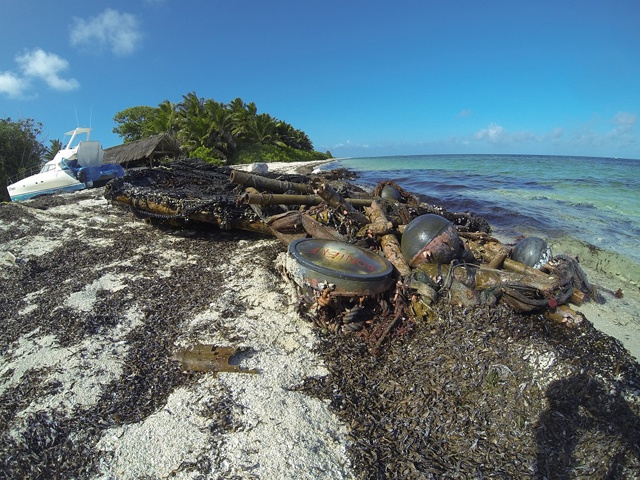 (Seychelles News Agency) - Sam Balderson, kitted out in his scuba gear, jumps off the boat and plunges into the underwater world of the coral reef off the coast of Alphonse Island. Alphonse is one of the outlying islands in the Seychelles archipelago, situated some 1,500 kilometres off the eastern coast of Africa.

Seven degrees south of the equator and 400 kilometres south-west of the main inhabited island of Mahé, the Alphonse atoll boasts kilometres of pristine tropical shorelines, lagoons and sea flats.

Today, instead of busying himself with observation and other research activities that are the more usual preoccupation of the Nottingam-born conservation officer, who works for the Island Conservation Society (ICS), he has a much more unpleasant and difficult task at hand: getting a hundred-kilo or more fish aggregation device (FAD) away from the reef and up into his tiny boat.

The discarded FAD consists of a square bamboo raft with fishing buoys on each corner. Hanging down from each corner is a long, thick rope made from old fishing nets tied up with old ropes, each one up to 50 metres long. He must haul the bamboo raft up onto the boat with the help of his colleagues, and then work laboriously to untangle the fishing net ropes from the surrounding coral and heave them onto the vessel.

Once all the flotsam have been piled into the boat, it poses another challenge to get it back onto shore – and yet another battle to try to find a way to dispose of the synthetic materials safely and sustainably, as the outer islands do not have a waste disposal system and rely on the Islands Development Company (IDC) to take all the refuse generated by conservation groups, researchers, tourists and fishermen back to the main island’s landfill.

Sam and his colleague Lucy Martin can only hope that the next barge coming out with supplies will have enough space for this massive piece of rubbish on the return leg back to Mahé.

FADs washing up onto shore are not a new problem for the ICS staff on the Alphonse and St François atolls. According to Sam, who has been stationed on the isolated and otherwise-uninhabited group of islands since December 2013, he and his team have had to pick up around twenty such floating devices so far this year, and the occurrence has been reported on other outer islands such as Desroches.

“Once they come into contact with coral, the coral will cut the ropes and nets, so the FAD starts to unravel and becomes hazardous to marine life,” Sam told SNA. “It’s not just a problem for marine life, it’s also a problem for shipping; for instance, at Alphonse Island we only have one entrance and the old FADs tend to wash up here in the lagoon, so we have had boats get their propellers caught in nets in the entrance, and you can imagine what a problem that might cause.”

“Sometimes they just wash up on the beach, and they are actually quite hard to deal with, because they can weigh up to several hundred kilos in total,” he said. “They get caught up on tree roots and the netting is a nightmare to try to untangle, so now I am more conscious of trying to remove them from the water before they wash up on the beach.”

FADs are increasingly used by commercial fishing fleets to attract large schools of fish into a concentrated area of open ocean.

“The way that a FAD works is that it’s meant to attract small fish. If you have anything floating in the water, small fish get attracted to it, seeking shelter. Then larger fish come in to eat the smaller fish, including tuna, whole size range including juveniles and large ones,” said Sam.

Once a mini-ecosystem is created around the FAD, fishing boats in search of tuna move in. They surround the FAD with massive seine nets and take everything in the area.

FADs can be sophisticated devices, often fitted with radio-locator beacons and biomass sensors to report the amount of fish underneath them. Tuna is the target, but turtles, sharks, juvenile fish and a wide range of other marine life get caught up in the trap, from which there is no escape.

They are then thrown back into the ocean as unwanted bycatch, but the large majority of them do not survive the ordeal. Scientists have argued that the vast numbers of juvenile tuna caught up in the traps threaten the sustainability of the tuna industry, as stocks are not given the opportunity to reach adulthood, breed and continue the life cycle.

For commercial purse seiners, using the technology increases the average amount of catch per trip, as all a captain needs to do is examine the current biomass level beneath the FAD on his satellite tracking system and head out to sea, confident of a big haul.

Some scientists have voiced concerns that FADs are an ecological trap that could negatively affect tuna’s migratory and feeding patterns, but a report by the International Seafood Sustainability Foundation (ISSF) argued there was no real evidence of this.

The deployment of FADs is commonly banned across the western Pacific Ocean during August and September, but according to environmental scientists at Greenpeace, the ban has been largely ineffective.

In addition to many fishing nations choosing to ignore the regulations, Japan currently holds an exemption from the ban.

Although four tuna Regional Fisheries Management Organisations (RFMOs) already have some general FAD management measures in place, only the Indian Ocean Tuna Commission (IOTC) has thus far adopted a FAD management plan, which was blocked in all the other RFMOs.

Describing the current use of FADs as a “free-for-all” until more stringent regulations are imposed, Sam would at least like to see some of the synthetic materials on FADs replaced with natural, biodegradable alternatives that would not pose a threat if discarded.

“From our side at ICS, we have to deal with entanglement on the reefs, and we are also concerned about the potential entanglement of turtles and silky sharks, which seem to be the species most at risk,” he explained.

It is estimated that around 10,000 FADs are deployed in Seychelles’ vast territorial waters each year, each one equipped with an estimated $5,000 worth of tracking equipment.

“It seems to be pretty unregulated; captain’s rules are that if you find a FAD out in the ocean, they can remove it. The GPS buoys have the name of the boat written on it, but other vessels take it and put their own GPS on it, so there is a lot of swapping going on,” said Sam.

“In many cases, where the FADs get old, they just remove the GPS equipment and discard the rest of it in the ocean. The Indian Ocean Tuna Commission is trying to tackle the practice, fishing boats are meant to pick them up and remove them, but there is not always someone to keep an eye on them.”