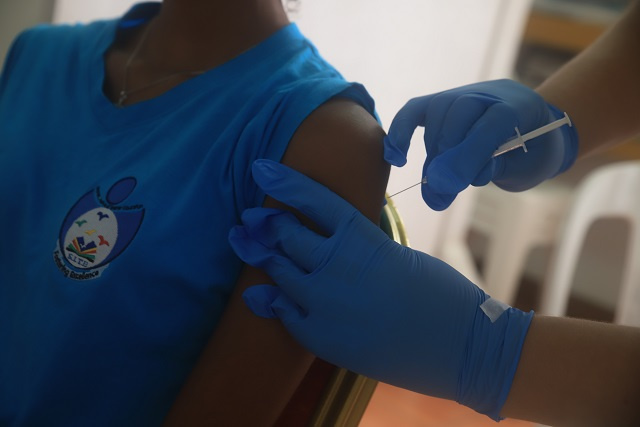 Around 4,800 young people from 12 to 17 have received the first doses of the Pfizer vaccine. (Joe Laurence, Seychelles News Agency)

(Seychelles News Agency) - The Seychelles’ health ministry has vaccinated over half of the island nation's estimated 7,000 adolescents aged 12-17 in a COVID-19 vaccination campaign that started September 10, a top official said on Friday.

Officials also announced that some islanders -- those with advanced health issues and older residents at the North East Point complex-- are eligible to receive a third dose of the vaccine.

Sanjeev Pugazhendhi, principal policy analyst at the Ministry of Health, told a news conference that officials are satisifed with the roll-out of the campaign for adolescents, and she said vaccinating over half of Seychelles' youth "is a very good uptake."

Around 4,800 young people from 12 to 17 have received the first doses of the Pfizer vaccine, which was a donation from the U.S government under the COVAX programme.

He added that as of next week, the health authorities will also be offering anyone aged 12 and above the chance to take the Pfizer vaccine through regional vaccination centres that will be open specifically for that purpose.

The centres will be in Anse Royale, Beoliere and Beau Vallon, as well as one situated at the Mont Fleuri Community Centre for people on the main island of Mahe. The facilities will be open from 8 am and will register patients until 3.30pm from Monday to Thursday.

The islands of Praslin and La Digue, the second and third most populated islands respectively, will also have their own centres that will only be operational on specific dates.

Praslin residents will have one based at Grand Anse Health Centre on September 28 for those taking the first dose of Pfizer whereas on September 29, the facility will be open to those who are due to take their second dose of Sinopharm.

The vaccination centre on La Digue will be open on October 1st from 8 am to 3pm.

The health ministry in Seychelles, an archipelago in the western Indian Ocean, announced that people who have not yet received any COVID vaccines can take their first dose of the Pfizer shot as of next week.

Pugazhendhi added that “based on our assessment of evidence to date based on local and international research, we’ve made a decision to offer third doses to certain vulnerable population groups, namely dialysis patients and oncology patients as well as residents of the North East Point complex.”

The North East Point complex is one that includes a hospice, hospital and home for the elderly based in the north of Mahe.

Further priority groups will be announced next week although as of October 4 the health teams will be redeployed to schools again to administer the second dose of the Pfizer vaccine.

Seychelles has recorded 21,257 positive COVID-19 cases among which 485 are still active. The island nation has recorded 115 COVID-related deaths.