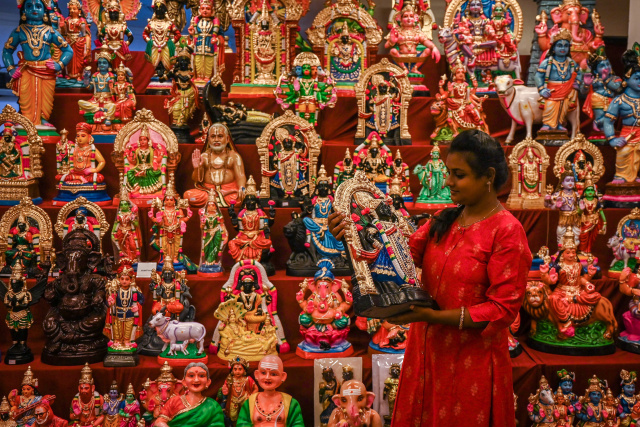 A woman picks up an idol representing deities and characters from the Hindu mythology used as a decoration ahead of the Navaratri (nine nights) festival, in Chennai on September 20, 2021. (Arun SANKAR / AFP)

(AFP) - Nepal has restarted visas on arrival for vaccinated tourists as South Asian nations attempt to revive tourism businesses devastated after 18 months of the pandemic.

A near travel shutdown has been in place in India, Bangladesh, Nepal, Bhutan and Sri Lanka for more than a year as successive waves of coronavirus took a deadly toll.

Nepal reopened to tourists and scrapped quarantine requirements for vaccinated foreigners on Thursday and its neighbours are expected to quickly follow as they seek to bolster linchpin industries in their economies.

"The resumption of on-arrival visas is aimed at reopening the tourism sector which is one of the mainstays of Nepal's economy," Tourism Ministry spokesman Tara Nath Adhikari told AFP.

All visitors must still take a pandemic test on arrival and unvaccinated travellers have to quarantine for 10 days.

The decision came just as monsoon clouds cleared for the autumn trekking season, and many are hopeful it will help drive up the arrivals.

"So many have lost jobs and livelihoods. This decision is crucial for all of us and we are hopeful that at least some visitors will return," said Nabin Trital of the Trekking Agencies Association of Nepal.

Neighbouring India is soon to announce that it will give away 500,000 free tourist visas as it also starts to reopen after more than a year, officials told AFP.

The country had more than 12.5 million tourists in 2019 but lost hundreds of millions of dollars after the shutters came down in March last year.

New Delhi is negotiating with international airlines to get scheduled flights resumed from main markets in North America and Europe, the officials said.

Bhutan recently let in its first foreign tourist, an American who spent three weeks in quarantine.

The country has imposed draconian restrictions to minimise the impact of the pandemic, recording only three coronavirus deaths in the population of 700,000.

Vaccinated tourists began entering Sri Lanka in July, without having to quarantine if they test negative for Covid-19 on arrival.

South Asia is highly dependent on tourism, which accounted for some 47 million jobs in 2019, according to the World Travel and Tourism Council.

But the pandemic left beaches and mountains deserted, from Everest to the Indian Ocean, and the fall in tourism played a major role in recessions seen by most of the countries last year.