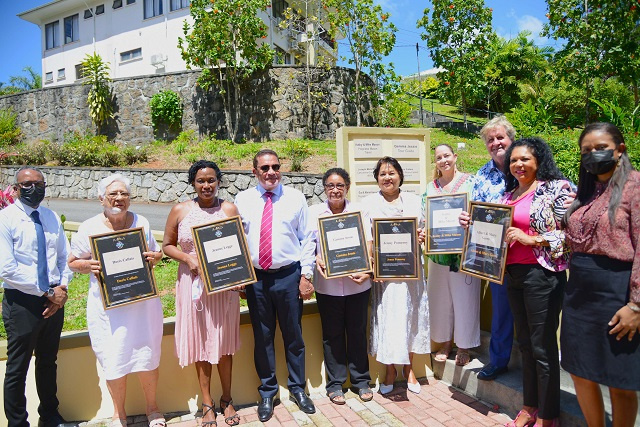 Ten people who have contributed to the progress the tourism industry of Seychelles has made so far were recognised as pioneers. (Vanessa Lucas, Tourism Seychelles)

(Seychelles News Agency) - The recognition of tourism pioneers in Seychelles should serve as encouragement for the island nation's youth so that they know that at the end of the journey there is a reward, the tourism minister said on Monday.

Minister Sylvestre Radegonde spoke during a short ceremony to unveil the names of 10 people who have contributed to the progress the tourism industry of Seychelles has made so far.

The names of the sixth batch of tourism pioneers were engraved on ceramic tiles displayed on concrete pillars at the Seychelles Tourism Pioneer Park, located at the entrance of the Seychelles Tourism Academy (STA) at La Misere. The unveiling of the plaques coincided with World Tourism Day, which is celebrated on September 27 each year.

The Park was opened in 2015 by former President James Michel to honour Seychellois who have dedicated their lives to the country's tourism industry. The location is also significant as it is where young people interested in the field are trained.

Radegonde outlined that it is important for Seychelles, an archipelago in the western Indian Ocean, to recognise people who have contributed to the industry, as it is the main economic pillar of the country.

He went on to add that Monday's ceremony is the first time since the tradition started where the people who are being honoured are still alive.

"In the past, we recognised people who had already passed away. We believe that we need to give people recognition when they are alive. It is good that they know that their contribution is greatly appreciated," said Redegonde.

"The people we recognised today have been in the industry for many years, and people who know them saw how they started out - really small - and how, through hard work, they have been able to make it to where they are today," he continued.

Talking to the press after having received her award, Gemma Jessie, a former tour guide, said that she hadn't expected to be recognised today.

"I feel really happy and proud. I poured my heart into my job. The recognition is a reward in itself. My advice to others is to never give up. Make sure that you know what you are doing and always put a smile on your face. If you do not know something, don't say just anything - research the topic and let your client know that you will get back to them. Nowadays, clients coming to Seychelles most probably know more than we do, as they do their research first. As such, we need to be well versed in what we are doing. As a guide, your greatest tool is information and the correct one at that," said Jessie.

Also addressing the youth, another pioneer, Mary Geers, said that nothing is really easy, but if you put your heart and everything that you have into it, you will go a long way.

"This is what happened to me. When I was offered a job at the start of tourism, looking back today, I was then doing the job of five persons. Don't look at what you have to do, just do it with all your heart and energy," she said.