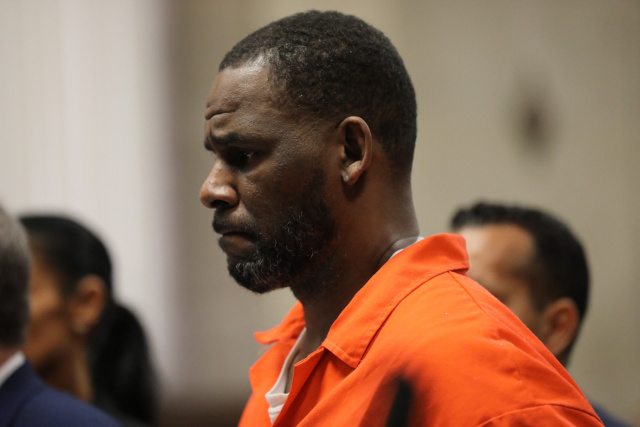 (AFP) - R. Kelly on Monday was convicted of leading a decades-long sex crime scheme, with a New York jury finding the superstar who once dominated R&B guilty on all nine charges, including the most serious of racketeering.

After six weeks of disturbing testimony, the jury deliberated just nine hours before finding the incarcerated 54-year-old celebrity guilty of systematically recruiting women and teenagers for sex, before grooming and brutally abusing them.

The case, delayed for over a year by the coronavirus pandemic, is widely seen as a milestone for the #MeToo movement: it is the first major sex abuse trial where the majority of accusers are Black women.

He faces up to life in prison, a dramatic fall for the "I Believe I Can Fly" singer long praised as R&B's king.

His sentencing is scheduled for May 4.

"We hope that today's verdict brings some measure of comfort and closure to the victims," said the Eastern District's acting US attorney Jacquelyn Kasulis.

Kelly's attorney Deveraux Cannick, who during the proceedings cast the star as a "playboy" and "sex symbol" whose "groupies" were out to get him, said his team was "disappointed with the verdict."

He told journalists they would be "considering" an appeal.

The state was tasked with proving Kelly guilty of racketeering, a serious charge commonly associated with the mafia that casts Kelly as the boss of an enterprise of associates who facilitated his abuse.

Calling 45 witnesses, including 11 alleged victims to the stand, federal prosecutors painstakingly wove the threads of alleged wrongdoing to demonstrate a pattern of crimes they say the artist born Robert Sylvester Kelly perpetrated with impunity, capitalizing on his fame to prey on the less powerful.

To convict Kelly of racketeering, jurors had to find him guilty of at least two of 14 "predicate acts" -- the crimes elemental to the wider pattern of illegal wrongdoing.

The jury of five women and seven men found that all but two of the acts had been proven.

Kelly was also convicted on all eight charges of violating the Mann Act, an anti-sex trafficking law.

Powerhouse lawyer Gloria Allred, who represented three of the six women indicated in the indictment, said Kelly's conviction served as a warning to others against using "fame to prey on their fans."

"The issue is not if the law will catch up to you," she said. "The only question is when."

Standing outside the courthouse, where dozens of media outlets gathered and Kelly's committed fans protested, Allred praised the verdict, even though it took years after murmurs of wrongdoing began: "We understand that justice moves at a glacial pace."

Accusers' stories ran in parallel: many of the alleged victims described meeting the singer at concerts or mall performances and being handed slips of paper with Kelly's contact by members of his entourage.

Several said they were told he could bolster their music industry aspirations.

But all were instead "indoctrinated" into Kelly's world, according to prosecutors, groomed for sex at his whim and kept in line by "coercive means of control," including isolation and cruel disciplinary measures, recordings of which were played for the jury.

"The brave survivors who overcame Mr. Kelly's abuse deserve our utmost respect for telling their stories and bringing an end to his 30-year reign of terror over the young and vulnerable," said Peter Fitzhugh, New York's Homeland Security Investigations special agent-in-charge.

Core to the state's case was Kelly's relationship with the late singer Aaliyah.

Kelly wrote and produced her first album -- "Age Ain't Nothin' But A Number" -- before illegally marrying her when she was just 15 because he feared he had impregnated her.

His former manager admitted in court to bribing a worker to obtain fake identification allowing the union, which was later annulled. That bribery was the first proven racketeering act that lead to Kelly's conviction of the charge.

It's the first time Kelly has faced criminal consequences for the abuse he's long rumored to have inflicted on women and children.

He still faces prosecution in three other jurisdictions, including Illinois federal court.

"Grateful to the survivors," tweeted dream hampton, whose Lifetime docu-series on Kelly re-focused attention on abuse allegations against him.

General » Be a reporter: Write and send your article » Subscribe for news alert
Tags: US, RKelly