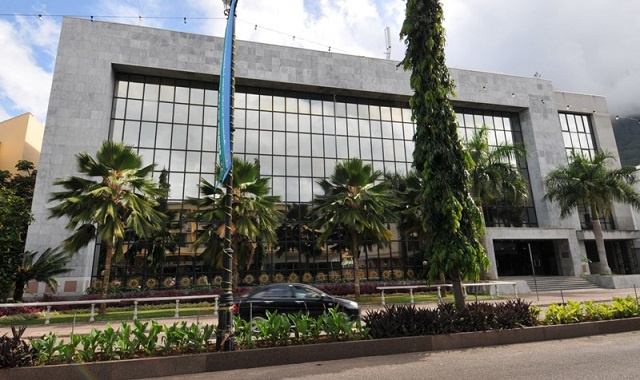 Abel explained that unconventional measures are ones the Central Bank does not usually use. (Seychelles Nation)

(Seychelles News Agency) - The Central Bank of Seychelles (CBS) will take unconventional measures against commercial banks if they do not implement monetary policies put in place in June, a top official said on Tuesday.

The governor of the central bank, Caroline Abel, conveyed that warning to bankers in a press conference on monetary policy decisions for the fourth quarter of 2021.

In late June, the Central Bank lowered its monetary policy rates for the third quarter of 2021 to 2 percent, one percentage point lower than the previous quarters. This realignment was deemed necessary in order to reduce the cost of credit and in turn boost economic activity. In that respect, the Standing Credit Facility was lowered from 6 percent to 3.5 percent and Standing Deposit Facility from 1 percent to 0.5 percent.

"The monetary policy framework that we implemented in June reflects the economy that we have today. Each time the board takes a decision, it comes into effect three months after, meaning banks have enough days to act on it. Banks have until Friday, October 1 to do this. They need to make an announcement to the public in the coming days, before Friday, on what they will be doing. As agents of the Central Bank, commercial banks need to implement decisions taken by the Central Bank," said Abel.

Taking into account internal and external developments, the CBS board on September 27 decided to maintain the monetary policy rates at 2 percent, with its floor at 0.5 percent and the ceiling at 3.5 percent.

Abel explained that unconventional measures are ones the Central Bank does not usually use as there is a framework in place that is supposed to work.

"However, when you see yourself in situations where the framework is not doing its job, the Central Bank needs to look at other measures, taking into account the mandate of the bank, to ensure that these things are not compromised. At the moment I cannot say what the unconventional measures are, however, discussions are already ongoing internally. When the Central Bank places these measures on commercial banks, there needs to be an element of surprise so that they take the Central Bank seriously," said Abel.

She outlined that although the tourism sector is picking up, it has not yet reached the levels of 2019. As such all actors of the economy need to realise this and that the economy is still fragile.

While the exchange rate has remained relatively stable, it continues to be dependent on movements in the aggregate level of supply and demand, and as such, the underlying factors that influence these indicators.

Monetary policy in Seychelles to be loosened next quarter, bank official says