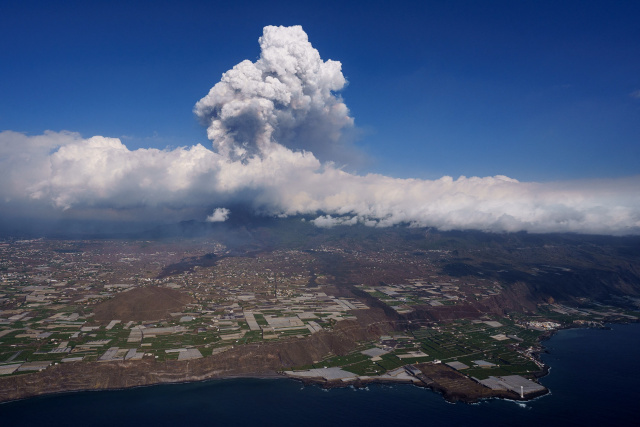 Lava from a volcano eruption flows on the island of La Palma in the Canaries, on September 23, 2021. A volcano on a small Spanish island in the Atlantic Ocean erupted forcing the evacuation of thousands of people. (RamÃƒÂ³n de la Rocha / POOL / AFP)

(AFP) - Lava from an erupting volcano in the Canary Islands has reached the ocean, volcanologists said, raising fears of toxic gases being released as the molten magma hits the seawater.

The Spanish archipelago had earlier declared an exclusion zone of two nautical miles around the location the lava was expected to enter the Atlantic and asked residents to stay at home.

La Cumbre Vieja volcano, which straddles a southern ridge in La Palma, an island with 85,000 inhabitants, erupted on September 19, spewing out rivers of lava that have slowly crept towards the sea.

Residents of several areas of Tazacorte, a village near the coast, were told Monday to stay at home to avoid harm from the release of toxic gases that can take place due to a reaction between the 1,000 degrees Celsius (1,800 degrees Fahrenheit) molten lava and water.

On Tuesday afternoon, the slow-moving lava flow, which has varied in speed over the past few days, was still around 800 metres (half a mile) from the coast.

Residents were warned to stay home due to "the possibility that there will be a small shock when the magma enters the seawater, and that this small shock causes vapours which can be toxic," stressed Miguel Angel Morcuende, technical director of the Canary Islands Volcanic Emergency Plan (Pevolca).

Experts say the entry of lava into the seawater could cause explosions and a fragmentation of the molten rock like gunshots.

"Inhalation or contact with acid gases and liquids can irritate the skin, eyes and respiratory tract, and may cause breathing difficulties, especially in people with pre-existing respiratory diseases," Involcan warned.

The two last eruptions on La Palma, in 1949 and 1971, killed a total of three people, two of them from gas inhalation.

A state of natural disaster has been declared on the island, where the molten rock has so far scorched its way across more than 268 hectares (660 acres) of land and destroyed 656 buildings, according to the European Union's Copernicus Earth Observation Programme.

The government on Tuesday released 10.5 million euros ($12.3 million) in aid for victims of the eruption, in particular to buy housing for those whose homes were engulfed in lava.

The eruption has forced the evacuation of more than 6,000 people from their homes but has not killed or injured anyone.

The lava flow has destroyed several roads, with the Canaries regional head Angel Victor Torres estimating last week that the damage to land and property would exceed 400 million euros.

Since it erupted, the volcano has been spewing huge columns of smoke and ash reaching several hundred metres high, disrupting air traffic.

Domestic flights were cancelled on Friday and the airport was closed the following day.

The airport has since reopened but flights remain suspended.

Experts estimate the eruption could last for several weeks, or even months.

Like other islands in the archipelago off the northwest coast of Africa, La Palma relies mainly on the cultivation of bananas and tourism.