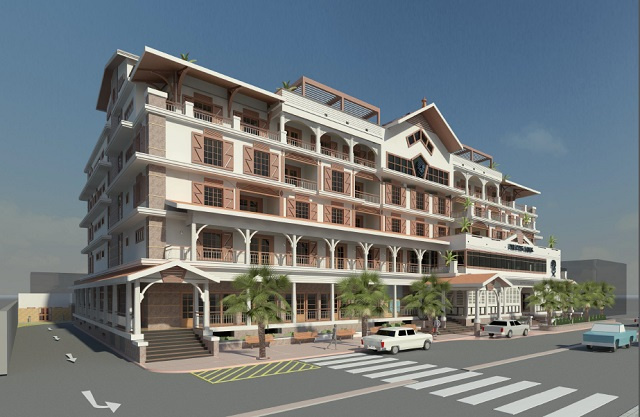 The plan of the new building of which construction will start next year and will be completed in 2024. (Seychelles Pension Fund)

(Seychelles News Agency) - Prospective tenants of a building under construction at the previous Pirates Arms establishment site in Seychelles' capital Victoria received updated information on the project on Wednesday.

The Seychelles Pension Fund (SPF), which owns the building, showed plans of the new establishment which will have five stories and will cater to various entertainment businesses primarily owned by Seychellois.

"At first we had intended to allow for the building to rent out office space but we have since realised that this will not be viable So we have now decided that the building will be an entertainment centre, comprising of restaurants, casinos, bars and ideas that businesses can approach us with," said Audrey Nanon, general manager for corporate services.

The old Pirate Arms building, which was a landmark in the centre of Victoria on Independence Avenue, is being redeveloped because of the high maintenance cost of repairs on the old building.

The Pension Fund is calling on interested businesses to come up with creative ideas as they will allow tenants to design their own space based on their needs.

The architect for the project, Paul Lesperance, gave a presentation on the building plans in which he revealed that the building will have its own 48-space underground parking garage, as well as roof terraces. It will also make use of photovoltaic systems for power.

"The design concept of the building will feature elements of traditional Creole architecture while we also wanted it to have free circulation with natural ventilation," said Lesperance.

He added that the iconic Pirates Arms restaurant will return as part of the project in its almost identical location as before and the ground floor will feature mainly retail shops and other services like barbershops and hair salons.

Work on the site began in late 2017 but stopped after the Planning Authority issued a stop notice in January 2018 because the heavy works were causing the annex building of the Central Bank to tilt.

Since there was no local geotechnical engineer to guide the Pension Fund, a South African Firm -- Ground Africa -- was appointed in February 2018 to conduct an investigation and make recommendations on the way forward.

A bidding exercise was done for tenants in 2018 but with the change in concept, the Pension Fund decided to relaunch the process. Bidders who were successful then will not have to resubmit but for others, priority will be given to original tenants of the building before it was torn down.

Construction of the new building is now expected to begin next year and be completed in 2024.

Prospective tenants have yet to receive an official cost of rent per square metre, but the Pension Fund says it is working on a fair price.

The Pirates Arms building was well known among locals and visitors for its restaurant serving popular Creole dishes with popular local artists also entertaining them. It also had an array of shops and offices.

For over 60 years the establishment was the rendezvous point for many and a place to hang out with friends in the heart of Victoria, the capital of Seychelles, an archipelago in the western Indian Ocean.