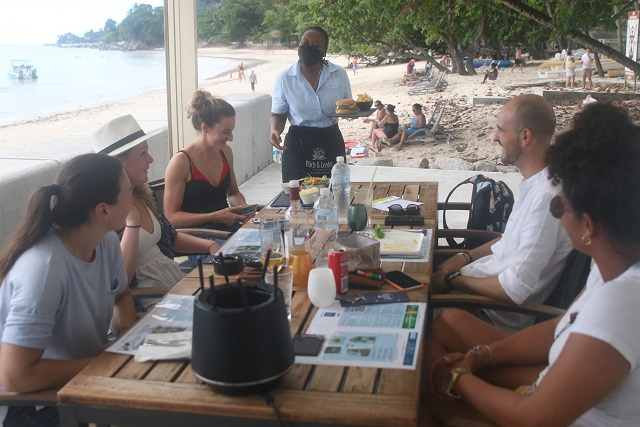 Robinson said the voice of the workers is not being heard and yet the workers are at the heart of the country's economy. (Joe Lasurence, Seychelles News Agency)

(Seychelles News Agency) - Workers in the public and private sector in Seychelles will not be paid a 13th month salary for the second consecutive year since the economy is not stable enough to bear the cost, a top government official said on Thursday.

Labour leaders criticised the decision, saying the island nation's economy is recovering thanks to its workers. They appealed for at least a partial 13th month salary, but said the cancellation was made without any negotiations.

The executive director in the Ministry of Employment, Veronique Bresson, told reporters that following consultations with partners "it has been decided and approved that for this year, the government will not be able to afford to pay a 13th month pay to workers at the end of the year."

The 13th month salary for both the public service and private sector workers became law in 2017 which stipulated that it should be paid on December 31 each year. To be eligible for the 13th month pay, a worker must have completed one year in employment including any probation period.

"It's obvious that the economy is fragile although it is recovering slowly. At the level it is now, we believe that what is most important is for workers to keep their jobs and maintain the salary they are getting now. So the government has decided that we need to give time to the economy to recover, so that the benefits can then be passed on to the workers," said Bresson.

The secretary general of the Seychelles Federation of Workers Union, Antoine Robinson, told SNA that since the economy is recovering -- thanks to the workers -- the government should consider giving a percentage of the 13th month salary.

"The voice of the workers is not being heard and yet the workers are at the heart of the country's economy. Since the pandemic workers have kept working even amidst the economic difficulty. This will alleviate the difficulties and the hardships that workers are currently facing," said Robinson.

The Cabinet of Ministers approved the suspension of the 13th month salary on Wednesday. The Cabinet also approved a new performance bonus scheme.

The President of the Seychelles Labour Union, Ralph Volcere, told SNA that he is disappointed with the government's position, saying that sacrifices by workers weren't being recognised.

"I had appealed to the government to consider giving workers at least 50 percent of a 13th month salary," Volcere said. "This would have been an incentive but unfortunately, this has fallen on deaf ears."

The employment department said it will begin consultations with partners to set up the scheme that will come into effect in 2022 and employers will then pay at the beginning of 2023.

"The way forward on the topic of 13th-month salary pay is that it needs to be performance-based because when it was first introduced in 2015 that was the idea," Bresson said.

Meanwhile, the authorities are also advising companies that had already planned to pay their workers a bonus at the end of the year to do so.