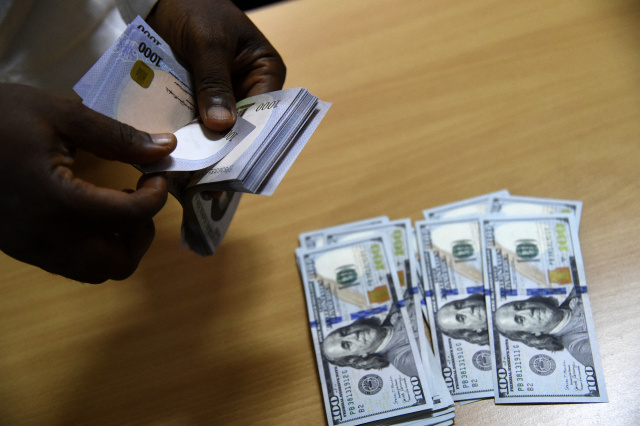 A man exchanges Nigeria's currency Naira for US dollars in Lagos, Nigeria, on April 19, 2021. Nigeria's economy was already struggling with a fall in the price of oil, Nigeria's major export, and a weak local naira currency, before the global pandemic struck.
Now Nigeria's inflation has soared to a four-year high of more than 18 percent in March 2021, with food prices up 22.9 percent, according to the National Bureau of Statistics. (PIUS UTOMI EKPEI / AFP)

(AFP) - Nigeria has delayed the launch of its eNaira digital currency, initially planned for Friday, because of the country's independence day celebrations, the Central Bank of Nigeria said.

Africa's largest economy was set to follow China and others in adopting a central bank-backed digital currency as it looks to tap into the popularity of crypto and virtual money.

"The planned unveiling on October 1, 2021 has now been deferred due to other key activities lined up to commemorate the country's 61st Independence Anniversary," the CBN spokesman said in a statement on the bank's Facebook page.

"The CBN and other partners were working round the clock to ensure a seamless process that will be for the overall benefit of the customer."

The statement did not give details on when the eNaira would officially be launched. Central bank officials did not immediately return calls seeking clarification on the new date.

Nigeria has seen a boom of cryptocurrencies as people look for ways to avoid the weakening naira currency and counter soaring costs of living and unemployment in Africa's most populous country.